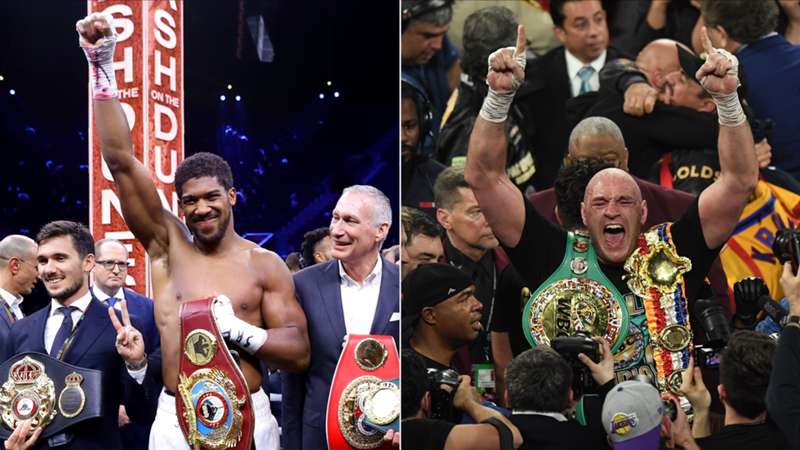 Deontay Wilder could get Tyson Fury back in the ring for a trilogy fight first, but Matchroom Boxing promoter Eddie Hearn believes an Anthony Joshua-Fury showdown is "inevitable."

"Three months ago, PBC, America had all the heavyweight belts and now Great Britain has all the heavyweight belts in Tyson Fury and Anthony Joshua," Hearn told DAZN on Friday. "The conversations have been ongoing. I spoke with (Top Rank CEO) Bob Arum probably half an hour ago. I think the biggest issue to sort out now is Deontay Wilder. If there's a deal to be done where Deontay Wilder makes way for a Joshua-Fury undisputed fight, we are absolutely all in for that fight."

Wilder was thoroughly dominated in a seventh-round TKO loss to Fury last Saturday night, but re-emerged to say that he fully intends to press for a rematch to get his WBC title back. If that indeed happens, then Hearn said Joshua plan on going through with his mandatory challenger fight against Kubrat Pulev. However, since Pulev, like Fury, is promoted by Arum, there's possible maneuvers to be made, so that Fury can fight Joshua first.

"We just recently closed a couple of minutes ago, the (Kubrat) Pulev-(Joshua) fight for June 20, but we know that Pulev is also promoted by Bob Arum, so there is a deal that can be worked there," Hearn continued. "If there's no step aside, let Fury and Wilder go again in July, we'll box on June 20 and then we can agree now, we can sign now for the undisputed fight in December of this year."

After defeating Wilder, Fury said he would give "The Bronze Bomber" a trilogy fight as long as the former champ is game, which he seems to be the case. So, December might be the more realistic target for a Joshua-Fury fight unless Hearn and  Arum can force the action sooner.