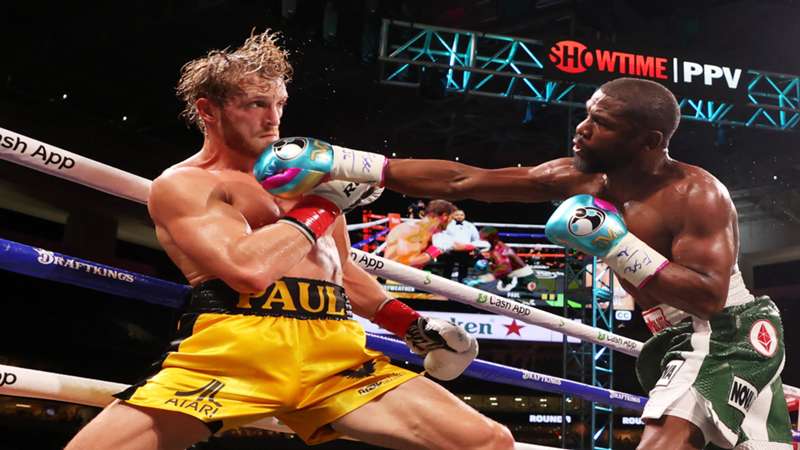 Floyd Mayweather Jr. and Logan Paul squared off in an eight-round exhibition bout.

Mayweather and Paul was precisely what the former said it would be as the exhibition had little action and went the distance, much to the dismay of the crowd.

"I had fun," Mayweather said in his post-fight interview. "You got to realize I'm not 21 anymore. But it is good to move around with these young guys, test my skills, just to have some fun. (Paul) A great young fighter, strong, tough. He's better than I thought he was."

The opening rounds saw Paul trying everything he could to connect on a Hail Mary shot, but Mayweather (50-0, 27 KOs) slipped out of the way every time and avoided damage.

Mayweather started bringing pressure in the fourth round and started walking down the YouTube personality. Anytime Mayweather would land a shot, Paul would grab Mayweather and hold on for his life. The hardest punch of the fight occurred in the sixth round when a Mayweather combination buckled Paul for a quick moment.

Heading into the eighth round, the expectation was Mayweather would put a fading Paul out and give the fans something to cheer about. Instead, Mayweather circled the ring, and Paul was smiling right back at him. The crowd loudly booed the antics until the final bell.

"I don't want anyone to tell me that anything is impossible ever again," Paul said in his post-fight interview. "The fact I'm even in here with one of the greatest boxers of all-time proves that the odds can be beaten. I'm "The Maverick". I go right when they go left. I'm the unorthodox one. I'm the independent one, and everyone has it in them.

Despite the displeasure of the crowd, Mayweather said he's up for another exhibition in the future.

"Yes," Mayweather said when asked if he'll do another exhibition. "I fought against a heavyweight, But I had fun even though he don't got that much experience, he knew how to use his weight, and he knew how to tie me up. I had fun. I'm sure he had fun."

Here is what happened at Floyd Mayweather vs. Logan Paul.

Thankfully it is over.

facebook twitter whatsapp
A left hook lands for Paul. Mayweather gets Paul to the ropes and shoves his forearm into Paul's face and talking to him in the process. Paul takes a deep breathe and Mayweather pops him with a left.

Who would have thought this would go to the eighth and final round?

facebook twitter whatsapp
Interesting that Paul didn't take a seat on the stool. Mayweather is walking Paul down. All Paul is doing is grabbing, which is upsetting Mayweather. Give Mayweather credit, he's trying to force the issue but Paul is content on holding and grabbing. A stinging left hook for Mayweather. An uppercut lands for the former five-division world champion.

Paul is slowing down tremdously and Mayweather is starting to put the foot on the gas pedal. Only a matter of time.

Best round of the fight and the crowd lets them know they appreciate the hard fought round.

facebook twitter whatsapp
Paul connects with the jab. Mayweather is just circling around and throwing an occasional shot to the body. Paul lands an overhand to the top of Mayweather's head. Pretty boring as Paul has his hands down and Mayweather is no where near him to do anything.

Can see Mayweather is going to let Paul wear himself out and then go to work.

facebook twitter whatsapp
The legendary Floyd Mayweather Jr. makes his way to the ring to a thunderous ovation.

Logan Paul is in the ring

facebook twitter whatsapp
Paul makes his walk to the ring with a Pokemon card in a baseball card case attached to a chain around his neck. Don't think I've ever seen that before.

It’s happening 👀🍿@LoganPaul on his way to the ring for the main event! #MayweatherPaul pic.twitter.com/EP7LG4yod7

It's time for Mayweather vs. Paul

facebook twitter whatsapp
The main event is here as Floyd Mayweather Jr. goes up against Logan Paul in an eight-round exhibition. No one knows what to expect. Sit and enjoy the spectacle.

facebook twitter whatsapp
After initially refusing to do a pre-fight interview, Mayweather does an interview saying he may be retired from boxing but didn't retire from entertainment and making money.

Good to see Mayweather change his mind and conduct an interview. People paid hard earned money to see the event and he's getting paid a lot to put the gloves on. It's the least he can do.

Jack dominated the short notice opponent from start to finish. He overwhelmed Colina and outclassed him. Jack sent Colina twice to the canvas early in the fourth round. With time ticking down, Jack landed a hard body shot to send Colina to the ropes and back to the mat. The fight was waved off as the rules of the Florida State Athletic Commission state if a fighter is knocked down three times in a round that it is over.

Jack did exactly what he was supposed to do and got out of there early. The 37-year-old wants to jump to cruiserweight and become a three-division champion.

Another point deduction for Colina

facebook twitter whatsapp
The referee deducts another point from Colina as he just keeps holding Jack and warns him that if he holds again then he will be disqualified.

Badou Jack in control through two

facebook twitter whatsapp
Unlike previous fights, Jack has come out the aggressor and going right at Colina. He's not giving him much room to breathe landing the straight right hand whenever he feels like it.

In the second round, Colina got a point deducted for continously holding.

facebook twitter whatsapp
In a backstage interview, Paul proclaims he isn't nervous before his eight-round exhibition against Floyd Mayweather. Is he lying or is he telling the truth?

facebook twitter whatsapp
It is time for the co-main event of Mayweather vs. Paul as Badou Jack (22-3-4, 13 KOs) squares off with Dervin Colina (15-0, 13 KOs) in light heavyweight action.

Jack, a former two-division world champion, was supposed to meet Jean Pascal in a rematch. But Pascal tested positive for four banned substances and was pulled from the fight. In stepped Colina, who fights in the United States for the first time.

This should be a cakewalk for Jack.

facebook twitter whatsapp
Arias def. Hurd via split decision (94-95, 97-93, 96-93). Shocking that one judge gave the decision to Hurd. It was a fight of momentum. Arias controlled the first four rounds and Hurd came back in rounds five through seven.

It came down to the championship rounds and Arias showed he wanted it more. Even with the phantom knockdown in the ninth round, Arias bit down on his mouthpiece and stayed the aggressor and got the job done.

In his post-fight interview, Hurd felt he did enough to win and blamed the ring but Arias had to compete in the same conditions so that excuse holds little water.

What a win for Arias. It was a must-win and he came through in a big time way.

facebook twitter whatsapp
Here in the ninth round, Hurd misses a shot and Arias slips but the referee rules it a knockdown. Very questionable ruling as there's rain on the canvas and Arias keeps slipping.

facebook twitter whatsapp
Arias had arguably won the first four rounds and looked to be on his way to an easy victory. But Hurd has come back won the last three rounds. He's been the aggressor by walking Arias down, mixing up the right hand and pounding the body with a hard left hand.

DAZN News has Arias up one round heading into the eighth.