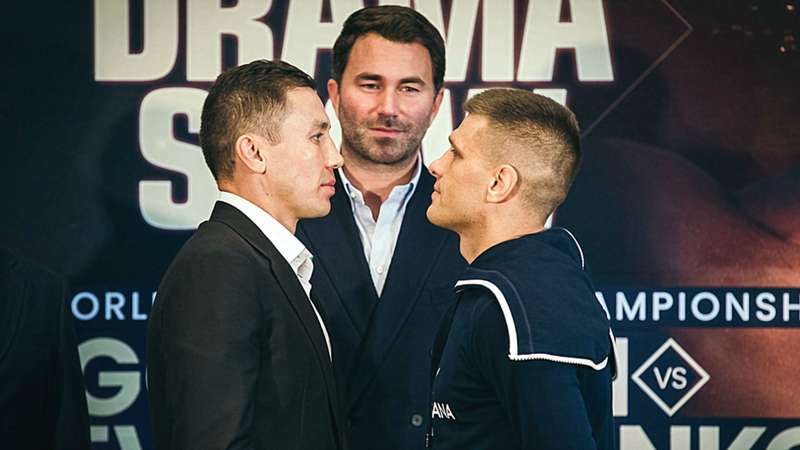 Top middleweights Gennadiy Golovkin and Sergiy Derevyanchenko go head-to-head on Oct. 5 for the vacant IBF middleweight title, a fight that isn't on traditional television. Here's how you can live stream the fight.

Golovkin (39-1-1, 35 KOs) rebounded from his first career loss to Canelo Alvarez in September 2018 to score a fourth-round knockout over Steve Rolls in June. He'll look to get win No. 40 against Derevyanchenko (13-0, 10 KOs), who enters as a sizable underdog.

Derevyanchenko was unsuccessful in his first attempt to win a world title, losing by split decision to Daniel Jacobs in October 2018. But the 33-year-old came back with a unanimous decision win against Jack Culcay in April.

The fight between GGG and Derevyanchenko is not available on traditional pay-per-view via cable or satellite. Instead, fight fans will need to subscribe to DAZN and download the app in order to live stream the fight.

Below is all the information you'll need to watch the fight between GGG and Derevyanchenko.

How to watch GGG vs. Derevyanchenko

The fight can be streamed by signing up for a subscription on DAZN, a global multi-sport streaming service that came to the United States in September last year. It is not available on pay-per-view. Golovkin signed a three-year, multimillion dollar deal with DAZN in March that will see him fight twice a year for the next three years.

The DAZN app can be downloaded on many internet-connected devices, including Roku, Apple TV, Google Chromecast, iOS, Android, Xbox One, Playstation 4 and Playstation 3. The fight can also be viewed on a computer desktop from Chrome, Firefox, Internet Explorer and Safari browsers via DAZN.com.

Comcast customers can sign up for DAZN on Xfinity Flex and soon on Xfinity X1.

How much does GGG vs. Derevyanchenko cost on DAZN?

If you're new to DAZN, you can sign up for a monthly subscription or annual pass to watch the fight. The annual pass — which includes access to all of DAZN's live events, as well as highlights, replays, behind-the-scenes features, original shows and live reports — costs $99.99, which averages out to a little over $8 a month. For those who want a monthly plan instead of the longer-term value, fight fans can sign up for a monthly option for $19.99.

A subscription also includes access to archived Golovkin fights, such as both bouts vs. Alvarez and his 2017 victory over Jacobs.

What time does GGG vs. Derevyanchenko start?

The fight's undercard will begin at 7 p.m. ET from Madison Square Garden in New York City. The main card is expected to start about 9 p.m. ET. GGG and Derevyanchenko are expected to take their ring walks about 10:30 p.m. ET, though it depends on the length of the earlier fights.