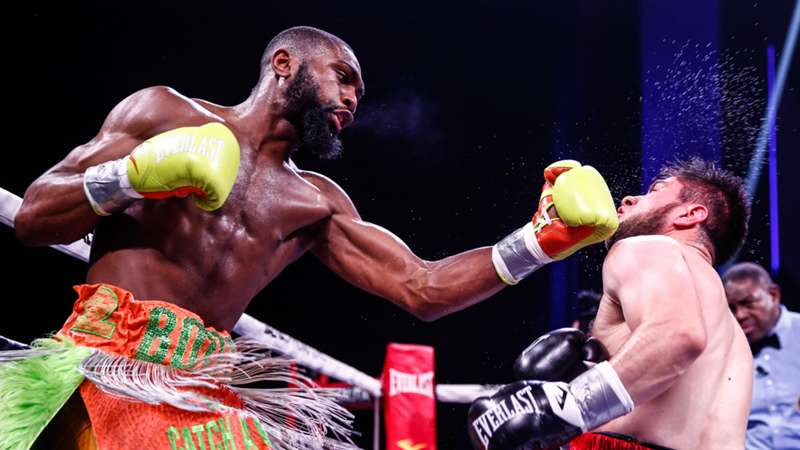 Punching power and showmanship combined with defensive slickness has the undefeated Philly fighter knocking down the door for a world title shot.

Jaron Ennis used a shoulder bump to create space between himself and Bakhtiyar Eyubov before peppering him with a stiff left jab.

In another sequence, Eyubov had Ennis where he wanted him — against the ropes — but the Philadelphia fighter unleashed a right hook-straight left counterpunch combination to crumple his opponent.

Yet another moment had him winding up his right hand like Roy Jones Jr. used to do and splitting Eyubov’s guard with an uppercut, piecing it together with a lightning-quick left hook.

To put it bluntly — Jaron Ennis is a variety pack of bottomless boxing skills.

“I give you everything you want,” Ennis tells DAZN News. “Whatever you need, I got it.”

Shortly after blasting Eyubov with a fourth-round TKO to start his 2020 campaign last month, the undefeated Ennis (25-0, 23 KOs) proceeded to call out the welterweight division’s champions for a world title shot.

Whether it’s WBO titleholder Terence Crawford, unified champion Errol Spence Jr., WBA titleholder Manny Pacquiao or WBA (Regular) champ Alexander Besputin, Ennis wants the division to know that he’s a problem that isn’t going anywhere any time soon. And if knocking on their doors isn’t working, “Boots” is ready to pound them down as he did with Eyubov with punishing body shots.

“My fan base is getting bigger, I’m getting a lot more people behind me,” Ennis says. “The world is starting to see who I am. I’m making noise now.

“I’ve been ready,” he continued. “I’m just waiting for the opportunity. By the end of the year or beginning of 2021, I should be getting a (world) title shot.”

Ennis does everything in the ring off feel and instinct. His father and trainer, Derek “Bozy” Ennis, and two brothers helped “Boots” create his flashy style as a boxer-puncher with accuracy and thumping power and defense and slickness for good measure.

Ennis says he was 8 months old when his dad, a former boxer, brought him to the boxing gym. Ennis’ father had taught the southpaw how to be right-handed at the age of 8. That valuable lesson paved the way for Ennis to be built into the boxer he is today, ambidextrous with his onslaughts.

“That’s all I used to watch when I was little,” Ennis says of the legends. “Roy Jones and Pernell Whitaker are two of my favorite fighters. Roy was just so crowd-pleasing, and I try to put that in my arsenal to be crowd-pleasing and exciting for the fans. Pernell got the slickness and will make you move.

"Everybody says I remind them of Roy Jones or Pernell Whitaker,” he continues. “I feel like I give you the crowd-pleasing and the excitement and the defense and slickness too.”

That inspiration combined with Ennis’ incessant training, which includes logging rounds of boxing and favoring chopping wood and flipping truck tires over lifting weights, is what fuels the 22-year-old to be so daring in the ring.

For instance, there was a moment in his third-round TKO of Armando Alvarez in July 2018 that had Ennis ducking and spinning under a right-left combination and completely turning his back to his opponent, pausing for dramatic effect and showmanship.

For Ennis, it’s simple. The work he puts into his training and honing of his skills allows him to pull stunts like that with supreme confidence.

“I’ll throw my hands up high, I’ll walk toward a guy, I’ll give you different looks,” says Ennis, who often looks like he's floating on air between punches. “It’s never the same.

"It’s not difficult to me. I was born into this sport," he adds. "Everything I do in the ring is just natural, it just comes to me.”

Ennis has looked so scintillating at times that he wonders if that’s the reason a world title shot hasn’t come his way yet.

“I feel like that sometimes,” he says. “That’s why every time I fight I try to give em something different.”

Having gotten his 2020 journey off and running in January, Ennis plans on being active enough this year to secure that world title shot. Until then, he’ll be honing those gaudy boxing skills some more.

“I do what I’m supposed to be doing and a call might come,” Ennis says. “So, that’s why I always stay in the gym, stay ready and stay on point.

“Just keep following me,” he adds, “on this journey to a world championship.”