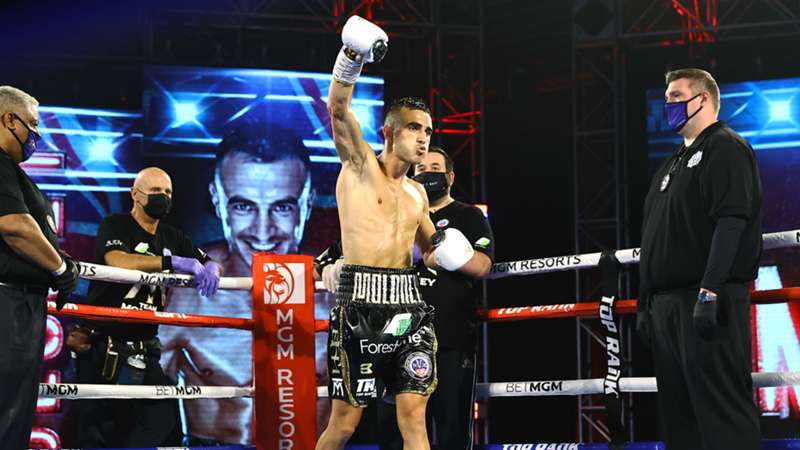 Two days after watching his twin brother suffer his first loss as a pro, Jason Moloney scored a TKO victory over Leonardo Baez after forcing him to retire on the stool between the seventh and eighth rounds.

Two days after witnessing his twin brother drop a tough decision to Joshua Franco, Jason Moloney (21-1, 18 KOs) forced Leonardo Baez (18-3) to retire after the seventh round for a TKO victory in the main event at the MGM Grand Conference Center in Las Vegas.

The victory puts Moloney in line for a possible world title opportunity in the 118-pound division, where champions such as Naoya Inoue, John Riel Casimero and Nordine Oubaali dwell.

Seven rounds of THIS 🤭@JasonMoloney1 went to work on the inside from start to finish and it’s stopped, as the Bantamweight contender earns the TKO victory over Leonardo Baez. #MoloneyBaez pic.twitter.com/6xkYPcT3FE

It was sweet redemption for Moloney, who witnessed his brother Andrew suffer a devastating decision loss on Tuesday. Invigorated to prevent the Moloney name to head back to Australia with a pair of losses, the 29-year-old looked excellent in wearing down Baez before earning the stoppage.

The taller Baez attempted to be the busier fighter but found himself being outclassed by Moloney on the inside and unable to avoid the crisp assault that the Aussie brought from the opening bell.

Baez was game but found himself being outworked as the rounds wore on. Baez attempted to use an inside assault to pound his opponent down, but Moloney put on a clinic at close range with his faster hands and more accurate punches.

Baez began to show the results of absorbing significant punishment in the seventh round as his face was busted up from the assault. As he went to his corner, it was clear that he had enough, and the fight was waved off.

“That was the greatest moment of my career," Moloney said afterward. "It was tough watching my brother the other night, but I knew I had a job to do. Thank you to my team. I sacrificed so much for six weeks, leaving my fiancée and my baby. I’m just over the moon.”

In the co-main event, Abraham Nova won a unanimous decision over Avery Sparrow to improve to 19-0 in a fight that was tighter than what one of the scorecards had. Although the scores were in favor of Nova at 99-91, 97-93 and 96-94, it was a lot closer than that.

The crafty Sparrow (10-2) kept Nova off-balance early by using his movement and slick boxing ability. But Nova never took his foot off the gas and applied pressure by moving forward and landing hard shots. The second half of their 10-round bout saw Nova pull away as he landed hard combinations that clearly rattled Sparrow.

But Sparrow did his best to stay in the fight and kept Nova on his toes. It was the fight that the unbeaten Nova needed as he faced some adversity in the form of a Philly fighter who presented formidable opposition.

Rising featherweight prospect Orlando Gonzalez (15-0) sent Luis Porozo (15-3) to the canvas on two occasions to remain undefeated with a unanimous decision victory in an eight-round bout.  A pair of left hands dropped Porozo in the second round and another knockdown came in the seventh round courtesy of a left hand to the body. Scores were 77-73, 77-73 and 76-74.

In the opening bout, Kingsley Ibeh (4-1) collected his fourth knockout with a fourth-round KO against Waldo Cortes (5-3) in a scheduled six-round heavyweight bout.