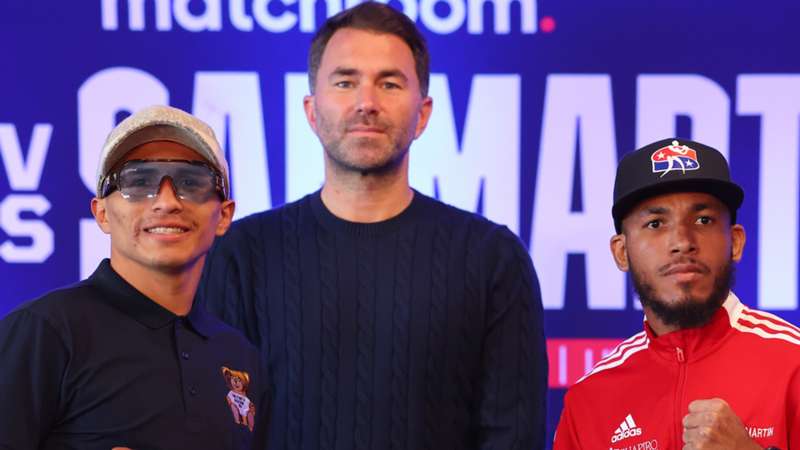 Ed Mulholland/Matchroom
Check your region for Bivol vs. Ramirez on DAZN

"Bronco" made good on his promise as he delivered on a scintillating third-round TKO of the Colombian veteran at the Plaza de Toros in Mexico City, and live on DAZN, on Saturday night.

After a right made Sanmartin teeter back and fall to the canvas in the third round, Lara would score his second knockdown of the frame with an eye-popping left hook across the jaw. As soon as Sanmartin dropped to a knee from the shot, the referee stormed in and ended the bout to give Lara yet another electric stoppage.

Well, after this victory, Lara will likely get a world title opportunity in the immediate future.

After Saturday night's win, Lara told DAZN's Claudia Trejos that he's interested in fighting both Wood and Josh Warrington though he'd give preference to a trilogy bout with Warrington.

"I want to face Josh Warrington," Lara said in Spanish. "It's become something very personal and I want to retire him from boxing."

Here's how the entire Lara vs. Sanmartin main card went.

Right to the body as Sanmartin winces only for the Colombian to get tagged with a left across the jaw as well. Big right hand lands for Lara as Sanmartin teeters back and falls to the canvas! Sanmartin beats the count but is in big trouble. Lara pummels Sanmartin and blasts him with a left hook around the guard. Sanmartin is down again! And the ref steps in and ends it right there.

"Bronco" Lara is a huge problem!

Lara vs. Sanmartin; Round 2

facebook twitter whatsapp
Sanmartin digs to the body of Lara who misses wildly with a sweeping right hand. Lara is diversifying his shots well, going from a straight right upstairs to an angled right-handed body shot as well. Left-right hook combo lands for Lara now as well. Lara brushes Sanmartin back with a raucous right hook as he pours on more punches for good measure. Sanmartin hits Lara with a low blow. Lara bends at the waist as Sanmartin pats him on the back to apologize. Moments later, Lara scores on a beautiful sweeping left hook. (10-9 Lara, 20-18 Lara)

Mauricio Lara vs. Jose Sanmartin; Round 1

facebook twitter whatsapp
Lara comes out peppering Sanmartin with the jab. He quickly segues to the body, making early deposits. More digging shots to the body from Lara. Sanmartin responds with a counter left. Lara with a left and mixes in a left uppercut as well. They clash heads and reset, yet go right back to being forehead to forehead. Sanmartin with some stiff hooks, which grab Lara's attention. But "Bronco" comes raging back with powerful sweeping shots. (10-9 Lara)

facebook twitter whatsapp
"Bronco" Lara, easily one of the most violent fighters in boxing today, has made his way into the ring in front of his hometown fans.

Mauricio Lara is moments away from clashing with Colombian veteran Jose Sanmartin. Another electrifying victory and Lara will propel himself toward a world title shot. Let's see if "Bronco" can deliver. He looks primed!

Unsure how Cuevas is still standing because he's taking a beating from Fierro who is unloading heavy-handed power shots. Cuevas is in big trouble as Fierro continues to unleash fury. He's blasting Cuevas with hard rights and lefts and the ref is taking a closer look. A left hook hurts Cuevas, who brazenly asks for more. Fierro continues to pour it on and the ref stops the fight.

Electric stoppage for Fierro who smelled blood entering the round and made sure he finished the show with blunt force.

Fierro vs. Cuevas; Round 6

facebook twitter whatsapp
Perhaps Cuevas was trying to see if he could make Fierro punch himself out that last round, although that's a painful strategy. Yet, Cuevas is striking quickly with crisp, fluid shots halfway into this round, so maybe he has a method to his madness. Fierro sits on two hard punches that Cuevas eats. Fierro backs Cuevas up with some more shots with a sweeping left uppercut for some style points to end the round. (10-9 Fierro, 58-56 Fierro)

Fierro vs. Cuevas; Round 5

facebook twitter whatsapp
Crunching uppercut lands for Fierro, who is gaining momentum this round and showing more aggression. Fierro is pouring it on now with what looked to be roughly 20 to 30 unanswered punches that he rocked Cuevas with in the center of the ring. Cuevas did come back stronger in the waning ticks of the round but after taking damage. (10-9 Fierro, 48-47 Fierro)

Fierro vs. Cuevas; Round 4

facebook twitter whatsapp
A better round for Cuevas who remains busy and quicker to the punch. However, he got caught with a riveting right hand through the guard and what could have been a fight-ending shot just missed seconds later. (10-9 Cuevas, 38-38)

Fierro vs. Cuevas; Round 3

facebook twitter whatsapp
Cuevas doing a good job moving after getting caught by a ferocious uppercut. Cuevas's head snapped back like a Pez dispenser from that shot. The early work from Fierro is enough to take this round. (10-9 Fierro, 29-28 Fierro)

Fierro vs. Cuevas; Round 2

facebook twitter whatsapp
Cuevas is the quicker, snappier puncher but Fierro has more thump to his shots. He blasted Cuevas with unanswered right and left hooks across the jaw to make an impact in the second round. (10-9 Fierro, 19-19)

Solid first round from Cuevas

facebook twitter whatsapp
"King" Cuevas quicker to the punch and poking out that jab well to immediately take the first round and put Fierro on notice. (10-9 Cuevas)

Co-main event up next

Angel Fierro vs. Jeremy Cuevas in lightweight action is upon us and it should be a banger between these two punchers.

All three judges score it 97-93 in favor of Mati. Rodriguez increased the pressure in the eighth but Mati made sure he closed out the fight on a solid note with enough stiff combinations to make a lasting impression. This is a quality victory for Mati who battled through the high altitude and subsequent fatigue midway into the fight and still managed to hang tough and pull out the win.

facebook twitter whatsapp
Mati maintains slight control although he's struggling with the high altitude of Mexico City and is breathing heavily. Making matters tougher is the fact that Rodriguez keeps applying pressure and is gaining momentum with his shots. We're entering the eighth round at the moment.

Open scoring being used for Mati-Rodriguez

During the early stages of the fifth round, DAZN ring announcer David Diamante announces that two of three judges are scoring the bout in favor of Mati with the other seeing things even. This is part of the WBC electing to use an open scoring system for this bout.

Back in the ring during the fifth round, Mati and Rodriguez clash heads again with Mati getting the worse of the painful exchange. Mati is countering sharply at the moment.

The fighters' heads clash in the second round, opening up a gash on the top of Rodriguez's forehead.

Mati finishes the round strongly with a body punch-right hand upstairs combo that especially connects well.