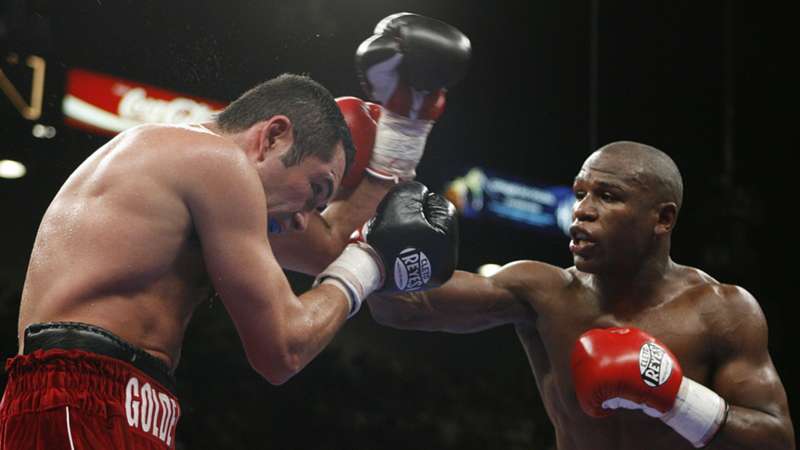 Oscar De La Hoya was beaten by Floyd Mayweather Jr. when the pair met in 2007.

With the possibility growing - and the desire of fans growing - to see the talented Gervonta Davis and Ryan Garcia in the ring, Oscar De La Hoya took the first step towards making peace with his bitter rival Floyd Mayweather Jr. 15 years after they fought.

That night in 2007, Mayweather dominated the Golden Boy with a split decision in one of the biggest money-making fights in history and from there the two went their separate ways, each with their own promotional company.

However, with the changes in the boxing world, The Golden Boy - now 49 - decided to wave the white flag and say the following:

"We're both adults. We're both businessmen. We fought each other, and there's like this bad blood, but that's in the past. I definitely feel like I beat him, but with all that bad blood and animosity, we'll wait. Recently, a few months ago, I literally wished him well," De La Hoya told FightHype.com.

"It's funny because everything he is or was or how he was promoting, he's a pioneer if you think about it. Everything he stands for, everything he did, in the past, in the present, now, what he's going to do in the future, it's like he's leading the way. He's leading the way. It's very admirable. I love the fact that my peers and fighters like Floyd, who are popular and rich, who know the business, who are smart, can lead the way. That makes me proud. Everything else in the past, the threats and the b—t ... Now we have business to do. Let's move forward, and possibly work together.

"My emotions towards Floyd -- I literally admire him for what he's accomplished. What he's accomplished. The vision he had in the past where nobody understood him. Everybody thought 'he's the villain and he's the bad guy.' No. He had a vision. He's an artist and a real fighter. He's one of the best. All of that is a testament to the fact that we've matured and literally seen the big picture.

"You're the man, Floyd. I admire you. I appreciate you, and thank you for paving the way."

According to information from BoxingScene, De La Hoya plans to move to Las Vegas, where he aspires to become mayor or failing that, bring an NBA team to the city, something Mayweather also has among his plans.

"Maybe there's something we can do together in Las Vegas, some kind of business. I've heard the NBA might come to town. Maybe we can come together and become a powerhouse there and help bring a team to the home we built. We built Las Vegas, literally [with our fights over the years]," De La Hoya said.