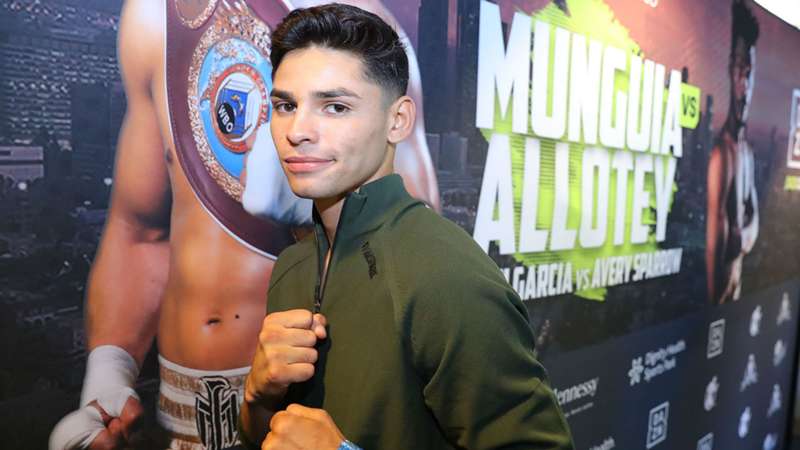 Can the fractured partnership be turned around?

Can Ryan Garcia and his promoter at Golden Boy Promotions, Oscar De La Hoya, get back on the same page?

Right now, it's hard to gauge after everything that happened over the weekend. To recap:

— Garcia's scheduled fight with Avery Sparrow for Saturday was scrapped; Sparrow was arrested Friday and faces a gun charge for an incident in April.

— DAZN's Chris Mannix reported on Friday night that Golden Boy president Eric Gomez told Garcia's camp that Romero Duno was ready to fight as a replacement, but that Garcia's camp didn't want to face Duno because "Duno is too tough."

— Finally, Garcia himself weighed in, including via his Instagram account, denying he had been offered Duno. As Mannix reported on DAZN Friday night, "(Garcia) said, 'I was never offered Duno. Nobody said they had a replacement. No one on my team was offered Duno. That was a total lie. They've offered me peanuts over and over to fight Duno. They found a way to try to make me fight Duno. (Golden Boy) wanted this from the start. This is their bleep up, not mine. Make the money work and I'm ready to fight Duno (Saturday night).'"

Unfortunately I will not be fighting SEPT 14th tonight 🗣 I want to thank all of my fans for your support, its because of you that I get motivated to train and be a fighter!! I want to apologize, but hope to be back very very soon. I owe you guys one. My promoter acted in a very unprofessional manner (pattern at this point) saying things that were false about me. I'm a fighter and not afraid to fight anyone!!! My team tried tirelessly to negotiate a fair purse amount to save the show but my promoter has shown little interest in my career. I promise I tried for my fans. But like all things in life, I'm staying positive and will come back soon. PLEASE SHARE AND LET ALL THE FANS KNOW THAT I AM NOT FIGHTING, I WILL NOT BE FIGHTING, I’m sorry for everyone that bought tickets!! @goldenboy @oscardelahoya @makeawar

At this point, it appears the relationship between the parties is on thin ice. On Saturday's broadcast of the Jaime Munguia-Patrick Allotey card on DAZN, Mannix point-blank asked De La Hoya if the parties could work things out.

Garcia is a rising star in the sport and, combined with his large social media following, could someday be a megastar. But De La Hoya feels Garcia has too many people chirping in his ear who aren't looking out for his best interests.

De La Hoya took on anyone and everyone in his career, including Felix Trinidad, Shane Mosley (twice), Bernard Hopkins, Floyd Mayweather Jr. and Manny Pacquiao. He says stepping in the ring came first, and the financial aspect only came along because of his willingness to take on the hardest challengers. The "Golden Boy" never mentioned Garcia's name, but said today's competitors have things backward in those two aspects.

"I was a fighter," De La Hoya said. "Money was not an issue for me. Never. Made a lot of money, but the fight was first for me. I didn’t care. But I guess there’s fighters … they aren’t like that anymore. Something’s changing, and it’s kind of sad."