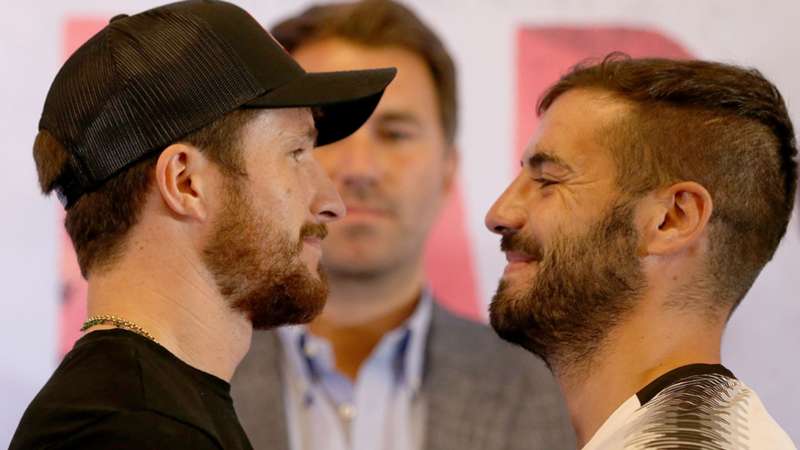 DAZN News caught up with Robbie Davies Jr. to find out why his Oct. 19 clash against Lewis Ritson has been billed "Bad Blood," how the rivalry started and more.

DAZN News: You and Lewis Ritson have had a bit of a back and forth on Twitter. Then, things got a little heated backstage at your last fight. Can you explain how this rivalry started?

Robbie Davies Jr.: At first it wasn’t really so much of a rivalry, Lewis had done well at lightweight and I was leading the pack at 140 pounds, so initially his target was me. But then when this fight was already being made behind the scenes, he was only saying that the fight had to be in Newcastle, and at the time I was still the British and European champion.

I'm fighting probley around welterweight on 2ng August - @lewis_ritson was offered to fight me in Liverpool at a later Date and there reply to Liverpool was NO!
But all is not lost. I do what's right for the fans, I will go to his F*cking Back Garden! @neilmarsh3 @EddieHearn

After that, the spat backstage, obviously I was getting ready to go into my fight, and Lewis walked past and shouted, "Do your job Robbie!" After that, my coach shouted something to him, as he had heard what Lewis had said on the previous interview, and then Lewis swore at my coach and called him a mug! I thought that was extremely disrespectful, and that’s what made me initially kick off and call him a "melt." I don’t know where that word came from, it’s not even one of my words, but it’s haunted me every day since. That’s basically it and it’s carried on from there.

DN: You’re from the fighting city of Liverpool, which has produced the likes of Tony Bellew, David Price, the Smith brothers Paul, Stephen, Liam and Callum in recent times. Do you draw on that heritage when it comes to carving your own legacy?

RDJ: All them fighters you’ve just named, I’ve been around them since I was a young amateur: The Smiths, Bellew, Price, Rocky Fielding. They’ve all been fighters I’ve even shared squads with at times as amateurs. I’ve seen what they’ve gone on to do and what they went on to achieve in their careers. I just want to be in that same bracket as all of them and remembered in Liverpool the same way they will be.

DN: How would you describe your fighting style?

DN: How would you describe Lewis Ritson’s style?

RDJ: I think he’s a strong, come forward fighter. He’s got a good jab and he likes to work, but with big shots. I’d say that was the best way to describe him.