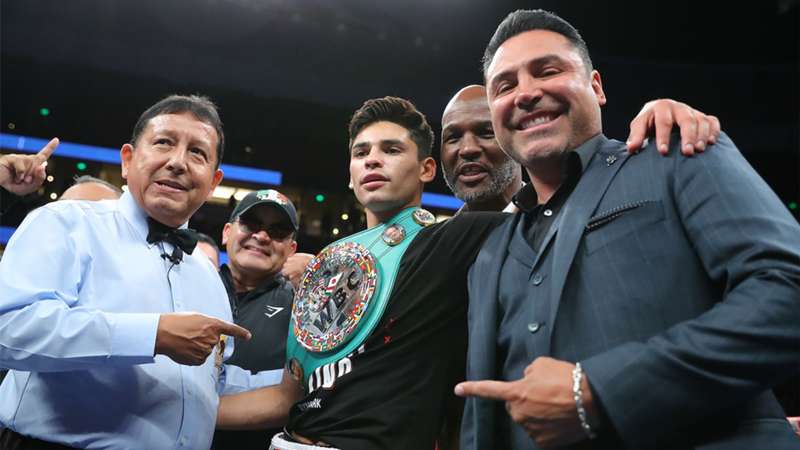 "Kingry" started his 2020 in style with an emphatic KO.

People wondered how Ryan Garcia would handle another step up in the competiton as he took on Francisco Fonseca in the headliner at the Honda Center in Anaheim, Calif., on DAZN. Was he more than just a social media creation?

The 21-year-old showed that he's the real deal and a legit force in the lightweight division by throwing a picture-perfect left hook to send Fonseca packing in just 80 seconds.

"I was planning for it to go longer," Garcia told DAZN's Chris Mannix after the win, "I'm not going to lie."

Garcia (20-0, 17 KOs) almost finished the fight off in the opening 30 seconds when he stunned Fonseca with a left hook. After clipping Fonseca with a few more left hooks, all Garcia was looking for was an opening to be able to put him away. He found it when Fonseca attempted a right hand, and Garcia turned his hips to blast him with a scintillating left hook that sent Fonseca out at the point of impact.

During Garcia's post-fight interview, WBC lightweight champion (in recess) and fellow rising star Devin Haney entered the ring and stood next to him. The man with over 4.8 million Instagram followers said he'd be fighting Jorge Linares next at Staples Center in Los Angeles. Garcia said after Linares that he wanted to face Luke Campbell, Gervonta Davis and then Haney, who told the DAZN broadcast team that he should be ready to return from shoulder surgery in July.

Here is what happened at Ryan Garcia vs. Francisco Fonseca.

(All times are Eastern.)

Garcia came out early and set the tone with the left hook. The second left hook stunned Fonseca, and it was only a matter of time before Garcia finished it off. Fonseca went for a right hand, and Garcia turned over a flush left hook to snap Fonseca's head and knock him out instantly.

11:50 p.m.:  It is now time for the main event as Ryan Garcia battles Francisco Fonseca in lightweight action. A big fight for Garcia (19-0, 16 KOs), who gets another step up in competition against the former two-time world title challenger. Can Fonseca (25-2-2, 19 KOs) do what Carlos Morales didn't do against Jorge Linares and ruin the possible Garcia-Linares fight in July?

Linares did exactly what he did in the third round to put Morales away. The 34-year-old hit Morales with a left to the body and punctuated his performance with another short right hand to nearly send Morales through the ring. Morales tried to get back to his feet but couldn't get up by the count of 10.

That was exactly what Linares needed to put himself in the driver's seat to face Ryan Garcia in July at the Staples Center.

Jorge Linares is BACK! pic.twitter.com/9l519vSfzx

Round 3:  A round that looked to be close in the final minute changed in a blink of an eye when Linares sent Morales face-first to the canvas with a short right hand. Can Linares close the show in the next round? (10-8 Linares, 30-26 Linares)

Round 2:  Linares and Morales came out firing to begin the round. But Linares took control and continued to use the jab and control the ring. Morales needs to keep his back off the ropes or he's going to get himself into trouble. (10-9 Linares, 20-18 Linares)

Round 1:  A feel-out round for both guys. Linares did enough by outboxing Morales with the jab. Watch out for the cut coming from Morales due to accidental headbutt. (10-9 Linares)

11:12 p.m.:  It's time for the co-main event of Garcia vs. Fonseca as Jorge Linares squares off with Carlos Morales in lightweight action. Linares (46-5, 28 KOs), a former three-division world champion, bounced back from a devastating first-round loss to Pablo Cesar Cano and earned an unanimous decision win against Al Toyogon in September. Morales (19-4-4, 8 KOs) comes in having gone 2-2-1 in his last five.

This is designed as a setup fight for Linares. A win by him and Ryan Garcia and they will meet in July at the Staples Center in Los Angeles, according to Garcia's promoter, Oscar De La Hoya.

Can Morales ruin the plans?

Confusing scorecards as the fight was much closer than they indicated. The fight looked to be close until the 10th round, when Rocha's trainer lit a fire under him to be more aggressive, and Rocha scored an emphatic knockdown. Rocha did enough to win, but it was an ugly performance. Rocha should use this as a learning experience. Solomon is a crafty veteran who is going to hang in there and make you outbox him. Intrigued to see how Rocha builds from this fight going forward.

10:51 p.m.:  Apparently Rocha didn't want to hate himself in the morning as he came out and put the pressure on Solomon from the outset of the 10th round. A right hand staggered Solomon and then dropped him with a right hand. Rocha proceeded to land bombs and finally sent Solomon to the canvas. Will that be enough in the judges eyes to win the fight as we head to the scorecards?

10:48 p.m.:  Love the scolding from Rocha's corner between Rounds 9 and 10 to pick up the pace and put the pressure on Solomon. Will that be the kick in the pants he needs?

Trainer: "You're gonna f***ing hate yourself in the morning!"

10:38 p.m.:  Quite surprised Rocha hasn't finished Solomon off as we enter the ninth round.

10:06 p.m.:  Up next at Garcia vs. Fonseca is Alexis Rocha facing off with Brad Solomon in welterweight action.

A little surprised by one judge seeing it for Kotey. If Kotey fought the way he did in the last three rounds, perhaps the 36-year-old gets the upset. Cobbs took a different method this time around by being more of a pugilist in using his accuracy and speed to secure the victory and remain undefeated even though the crowd let Cobbs know he shouldn't walked away the victor.

9:49 p.m.:  Cobbs loses a point for a low blow early in the ninth round. Good call by the referee as Cobbs has been fouling Kotey at various times of the fight. If Kotey can win the round then it could all come down to the last three minutes.

9:45 p.m.:  The crowd inside the Honda Center is letting Cobbs and Kotely how they feel, booing both guys after the eighth round. People are accustomed to a thrilling, in your face style from Cobbs. Instead, he's being more tactical to the dismay of the fans.

9:33 p.m.:  All Cobbs after five rounds. He's showing good footwork, using his quick hands to make Kotey continuously miss. But Cobbs needs to amp the work rate a bit. He's giving Kotey too much respect. A little pressure and he can put Kotey in some trouble.

Cobbs' nickname "Flair" is in tribute to pro wrestling legend Ric Flair. He got to talk to the "Nature Boy" at the end of Thursday's fighter meetings. He has a dynamic personality to go along with good skill in the ring. Kotey is Cobbs' toughest test to date. A good litmus test.

Ryan Garcia is in the building. pic.twitter.com/9LZ9XZBYbt

9:00 p.m.:  Welcome to DAZN News' live coverage that includes a lightweight main event between Ryan Garcia and Francisco Fonseca. Make sure you have the refreshments ready, kick back, relax and follow along for what is expected to be an exciting night of action.