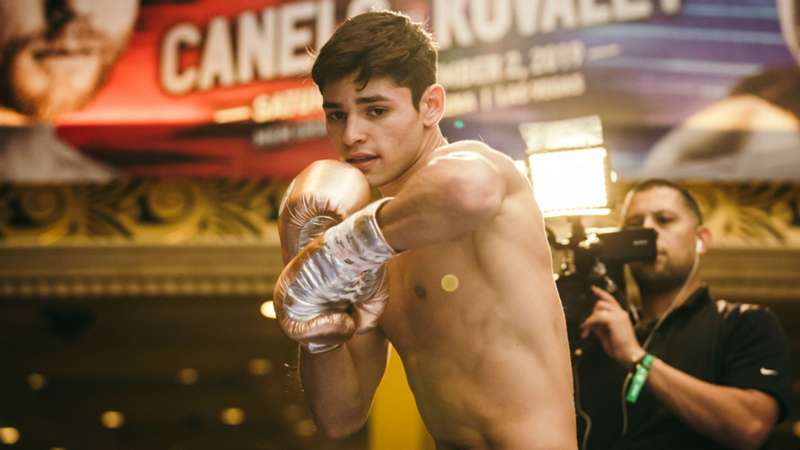 Ryan Garcia has an exit strategy in mind combined with doing something that not even Floyd Mayweather Jr. could accomplish.

Thinking about retirement at 21-years-old from your profession might sound far-fetched — at that age, a good majority of people are either finishing up college or still trying to figuring out what to do in life. Don't try and tell that to lightweight sensation Ryan Garcia, who competes in the main event on Friday night against Francisco Fonseca from the Honda Center, live on DAZN.

In his last time out, Garcia (19-0, 16 KOs) took a step up in competition when he scored a vicious first-round knockout in November on the Canelo Alvarez-Sergey Kovalev undercard.

Now he takes on Fonseca (25-2-2, 19 KOs), a former two-time world title challenger, whose two losses came at the hands of Gervonta Davis and Tevin Farmer.

For the man who has over 4.8 million Instagram followers, the time for taking fights to get his feet wet is over. It's now about securing the biggest fights possible against the marquee names in the sport. It's about accomplishing what not even Floyd Mayweather Jr., the man many pundits feel is the best boxer of this generation, could.

"At the end of the day, I’m not going to wait around for people to get older for fights to pass by," Garcia said. "I’m trying to get them right now. Titles mean a little less to me now. There’s so many titles being given away. (I) kind of lost my fire to get one. So I’m pretty much more like, ‘All right, let’s get the big names in there right now. Let’s get (Vasiliy) Lomachenko, Gervonta Davis, let’s fight Devin Haney. Let’s get these fights on right now’. If they’re great fights, I’ll do a rematch," Garcia added. "I’ll do a trilogy. That’s what I’m looking forward to. That’s my legacy.

"Everybody has their own way," Garcia added. "Everybody has their own thing. I felt like the multiple weight division thing has already been conquered. Manny Pacquiao did it. Oscar (De La Hoya, Garcia’s promoter) did it. Can you name one fighter, not even Floyd, that fought everybody in their prime? But there’s going to be one, and it’s going to be me, or at least I will be trying for greatness. Those are the fights. All those top guys. The top guys everybody is afraid of that don’t want to fight us when I’m chasing them."

Mayweather left a legacy in boxing about how to conduct business. Muhammad Ali left a legacy of greatness of who he faced in the ring and what he did outside of the squared circle. When Garcia hangs up in the gloves in the next couple of years, "Kingry" wants to leave a different type of impression.