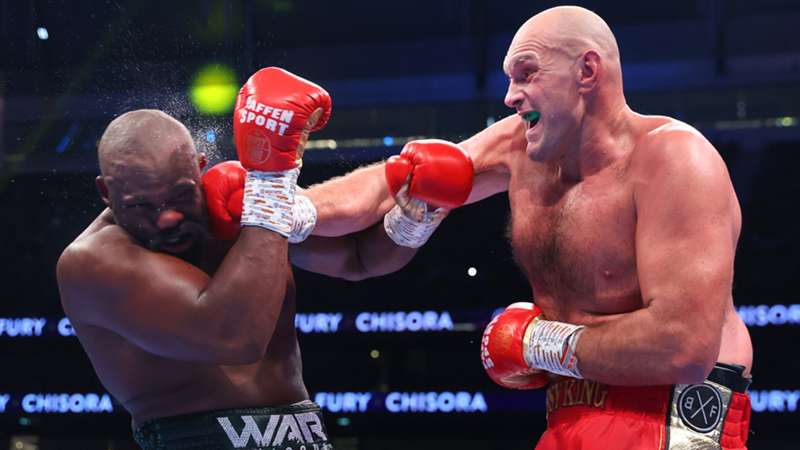 Tyson Fury dominated in what was a one-sided contest in the English capital.

It was no surprise that Fury was the overriding favourite going into this trilogy fight and it showed from the opening bell.

Chisora did come out swinging at the Tottenham Hotspur Stadium, but this all but lasted a few seconds as Fury used his superior range to nullify any threat 'Del Boy' posed.

Round one saw Fury land numerous right and left uppercuts, and this was a pattern which persisted for the whole fight.

A Fury right hand rocked Chisora in the third, but he somehow continued to take the punishment which began to make the contest an uncomfortable watch.

The damage from Fury's vicious assault was clear to see on Chisora as he slumped to his stool at the end of round seven with a slowly closing right eye as a result of the hard-hitting Fury left hands and a cut mouth.

The best thing for Chisora to do was be pulled out by his corner or the referee, but despite referee Loughlin's advice to trainer Don Charles at the end of round nine, Charles insisted that Chisora was okay to continue.

When both fighters met in the centre for the 10th round, Loughlin kept a close eye on Chisora and with just nine seconds remaining in the round, he brought an end to what was a brutal beatdown.

For Fury, this didn't help him learn anything. This was a tickover fight ahead of a potential undisputed heavyweight title fight with Oleksandr Usyk, who was ringside, early next year, and the pair did face off after the fight which sent the 60,000 capacity crowd at the Tottenham Hotspur Stadium into a frenzy.

But when it comes to Chisora, it surely is a sign that it's time to hang up the gloves. His time in boxing has provided numerous memorable moments for British fans, but after being on the wrong end of an onslaught from Fury, surely for the sake of his personal wellbeing, the 38-year-old will see that he can no longer compete with the top names at heavyweight.

Now attention turns to the negotiating table as Fury and Usyk's camp look to make an undisputed showdown for 2023, but as ever with boxing, nothing goes quite to plan in this crazy sport.

Re-live the highlights from the full Fury vs. Chisora card below.

Fury and Usyk face off ringside

The crowd went into a frenzy once the two champions locked eyes with each other and they engaged in an intense staredown.

This will hopefully be the start of the buildup to an undisputed showdown in early 2023.

Referee stops the fight in round 10, Fury wins

Tyson Fury is victorious after referee Victor Loughlin stopped the fight in round 10.

Derek Chisora showed his age at the Tottenham Hotspur Stadium, he was levels below Fury who dominated and unloaded on the heavyweight veteran.

An era of British boxing has come to a brutal and sad end.

Round 9: Referee tries to pull Chisora out

After another three minute barrage from Tyson Fury, Derek Chisora slumps to his stool.

The referee spoke to Chisora's corner about pulling him out of the fight, but Don Charles insisted that his fighter is okay.

Round 8: Signs of damage showing on Chisora

The battle scars are becoming more evident on Derek Chisora.

A closing right eye, damage to his lip, Chisora somehow battles on.

Round 7: Chisora needs referee or corner to save him

It's clear that Tyson Fury's punches are dealing immense damage to Chisora who is looking more unresponsive to his team as the fight progresses.

The referee or Chisora's corner need to keep a close eye on the heavyweight veteran.

Round 6: More of the same, Fury dominating

Chisora will have to do something special go the full distance.

Round 5: Chisora stumbles into the corner

It's getting to a stage now where the fight is becoming an uncomfortable watch.

Derek Chisora is unsteady on his legs as a result of the relentless punishment from Tyson Fury and at the closing stages of the round tumbles into a neutral corner.

Round 4: Quieter round, Fury still in control

A much tamer round compared to the previous three.

As instructed by coach Don Charles, Derek Chisora has attempted to use his jab to push Tyson Fury back.

While this has decreased Fury's activity, he is still able to control the pace of the fight.

Round 3: Fury rocks Chisora with uppercut

Surely it is only a matter of time until this fight is brought an end early.

Round 2: Fury unloads on Chisora

The final minute saw Fury back up Chisora onto the ropes and throw numerous uppercuts, but 'Del Boy' is still standing.

As expected, Derek Chisora came out swinging in the first, but Tyson Fury has already asserted control.

The WBC world heavyweight champion is using his superior range to keep Chisora at bay, while also landing right hands of his own.

Fury vs. Chisora is underway

Time for the British national anthem

facebook twitter whatsapp
Both fighters are in the ring, now it's time for the British national anthem, 'God Save the King'.

WBC world heavyweight champion Tyson Fury is making his way to the ring and the crowd is loving it.

Every word of the English football anthem 'Three Lions' is being sang by the 60,000 fans at the Tottenham Hotspur Stadium.

facebook twitter whatsapp
As the challenger, Derek Chisora will make his way to the ring first and is greeted by boos from those in attendance.

Sweet Caroline being belted out by the sell-out crowd

The ringwalks aren't far away with the 60,000 capacity crowd singing Sweet Caroline (the Tyson Fury version).

It's set to be an electric atmosphere for Tyson Fury vs. Derek Chisora at the Tottenham Hotspur Stadium.

There is another trilogy fight tonight

Tyson Fury vs. Derek Chisora is not the only trilogy fight taking place this evening.

In Glendale, Arizona, Juan Francisco Estrada and Roman 'Chocolatito' Gonzalez look to bring a fitting end to their long-running rivalry and you can see it live on DAZN.

Find out how to watch this historic fight here.

After a nervy opening round, Daniel Dubois retains his WBA 'regular' world heavyweight title after stopping Kevin Lerena in round three.

A Dubois right hand spelled the beginning of the end for Lerena who met the referee's count, but was then subjected to some hard-hitting combinations from the Englishman whose power proved too much for the South African and forced referee Howard Foster to step in and halt the contest.

This win was one where Dubois showed tremendous heart and courage after picking up a knee injury in the first which looked like it could spark a huge upset in North London.

Luckily for Dubois, he rallied and put on a show for the 60,000 fans in attendance.

Dubois down three times in round one

Daniel Dubois has been down three times in the opening round against Kevin Lerena.

While Lerena landed for the first knock down, Dubois then went down two more times on his own accord.

Judging by the replays and discussions with his trainer Shane McGuigan, Dubois has suffered a knee injury.

Dubois vs. Lerena is underway