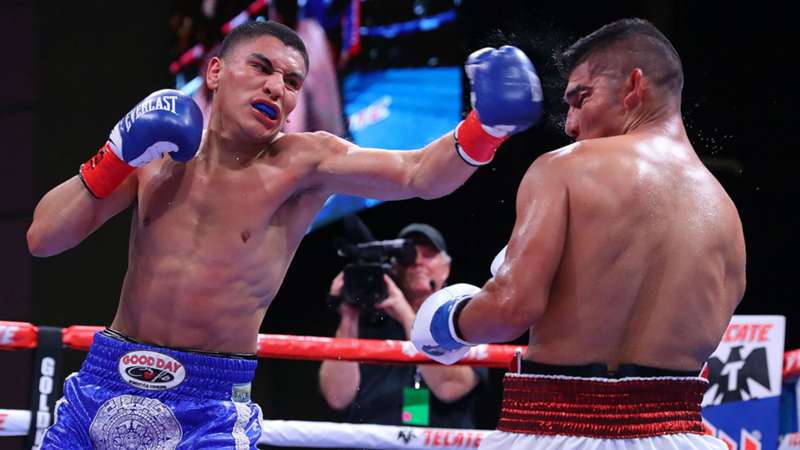 Another impressive showing from the 21-year-old rising star who has yet to allow the judges to have a say in his fights.

Vergil Ortiz Jr. buckled Antonio Orozco with a barrage of punches in the first round, but didn't go for the quick knockout.

That paved the way for Ortiz to have the longest fight of his young pro career, but the 21-year-old rising star gave his hometown crowd something to erupt about by dropping Orozco three times in the sixth round toward a savage KO at The Theatre in Grand Prairie in Grand Prairie, Texas, on Saturday night. With the win, Ortiz improves to 14-0, with all wins by the way of knockout.

After a game Orozco survived the first-round burst and dug his way back into the fight, Ortiz made sure it wouldn't go past the sixth.

Ortiz started his sixth-round onslaught with a vicious left uppercut that made Orozco take a knee. The second knockdown came from a right hook to the temple, before Ortiz closed out the show with a right-left combination that landed flush.

Ortiz landed a whopping 50 percent of his power punches in the emphatic win, which inches him one step closer to a world title opportunity, although he wasn't all the way pleased with his performance.

"I'm going to be honest ... I don't like the way I did in the fight," Ortiz said during his post-fight interview.

He added: "I definitely got a long way as a boxer to reach that world title status."

Ortiz also admitted that perhaps he got a "little too excited" and that "maybe I could have ended it, maybe not, but I had to force myself to slow down" during that first round.

Still, a win is a win, and the 31-year-old Orozco (28-2) had never been stopped in his pro career before he ran into Ortiz.

"Vergil caught me slipping; that's all I can say," Ortiz said. "We kind of got him in the ring and in the fight, but he is an excellent fighter and I can't take anything away from him."

The trilogy between bantamweights Franco and Negrete was supposed to put an end to their rivalry. Instead, it opened the door for a possible fourth fight between the two, as the rivals fought to their second draw in three fights as a result of an even, all-action bout that had both boxers fighting in the pocket and not giving up an inch.

We have another #Draw #FrancoNegrete3 Who wants to see a 4th Fight #Boxing pic.twitter.com/l9HZ1zV70W

Tanajara worked behind the jab steadily — doubling and even tripling it up on occasion — en route to the dominant win and keeping the USNBC lightweight belt. In total, he landed 85 jabs to Aviles’ eight. At certain points, it appeared that Aviles’ corner was threatening to stop the bout due to the stinging shots he was being punished by, but he stuck it out. After the bout, Tanajara called out Ryan Garcia for a fight.