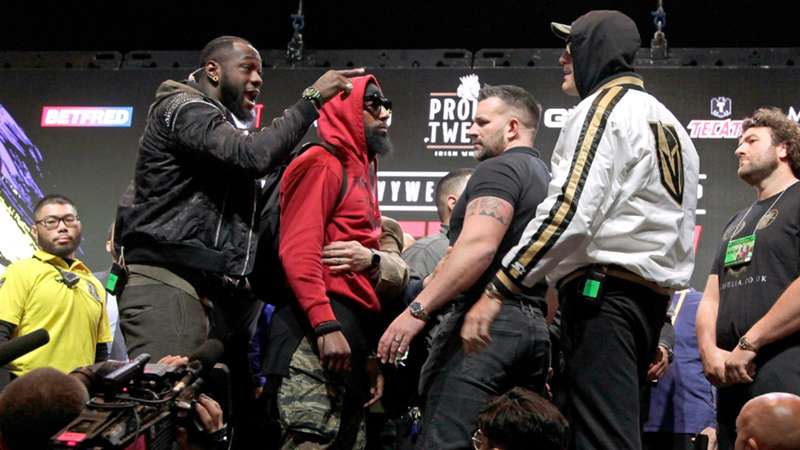 Both Wilder and Fury are vowing that the rematch ends in a knockout.

Tyson Fury outboxed Deontay Wilder, but "The Bronze Bomber" made him taste the canvas twice — with the second knockdown receiving an arguably late ring count that could have saved the "Gypsy King." That was the controversy that stemmed from their first fight, which ended in a split draw in December 2018.

Now, Wilder (42-0-1, 41 KOs) and Fury (29-0-1, 20 KOs) both vow to not leave it in the judges' hands, with each predicting a knockout as they run it back for the highly anticipated rematch. Wilder's WBC title and Fury's lineal championship will be on the line Saturday, Feb. 22 at the MGM Grand in Las Vegas.

If the final #WilderFury2 press conference is anything to go by, prepare for war on Saturday night. BUY the PPV: https://t.co/auWEj0MpeH pic.twitter.com/PDZAhyk5Pf

Here’s a complete guide to Wilder vs. Fury 2, with information on how to watch the fight, betting odds, undercard information and more.

What time is Deontay Wilder vs. Tyson Fury 2?

The Deontay Wilder vs. Tyson Fury 2 main card will kick off at 9 p.m. ET on Feb. 22. Wilder and Fury are expected to take their ring walks about 11:15 p.m. ET, although it could be pushed back to after midnight — the exact time depends on the length of the earlier fights.

Before the main card gets underway, a pre-show begins at 7 p.m. ET, followed by the undercards at 7:30 p.m.

Wilder vs. Fury 2: How to watch, live stream

The pre-show and prelims are available on ESPNEWS and FS1. At 8 p.m., the prelims continue on ESPN and FS1.

The Wilder vs. Fury 2 main card is an ESPN+/FOX joint pay-per-view. It is available via major cable and satellite providers.

It is also available via live stream through the Fox Sports app and ESPN+. The apps can be streamed on Amazon Fire TV, AppleTV, Google Chromecast, Xbox One, Roku, iOS and Android devices, many smart TVs, as well as web browsers on foxsports.com and espn.com. ESPN+ is also available via Playstation 4.

How much does Wilder vs. Fury 2 cost?

Where is Wilder vs. Fury 2 taking place?

The Wilder vs. Fury rematch will take place at the MGM Grand in Las Vegas after they fought to a controversial split draw in their original bout at the Staples Center in Los Angeles back in December 2018. Wilder isn't a stranger to Las Vegas, as this marks his fifth pro fight in the boxing hub. He defeated Luis Ortiz in their rematch at the MGM Grand Garden Arena in Las Vegas in November. The bout will mark Fury's third straight fight in Las Vegas, as he defeated his past two opponents, Otto Wallin and Tom Schwarz, in "Sin City."