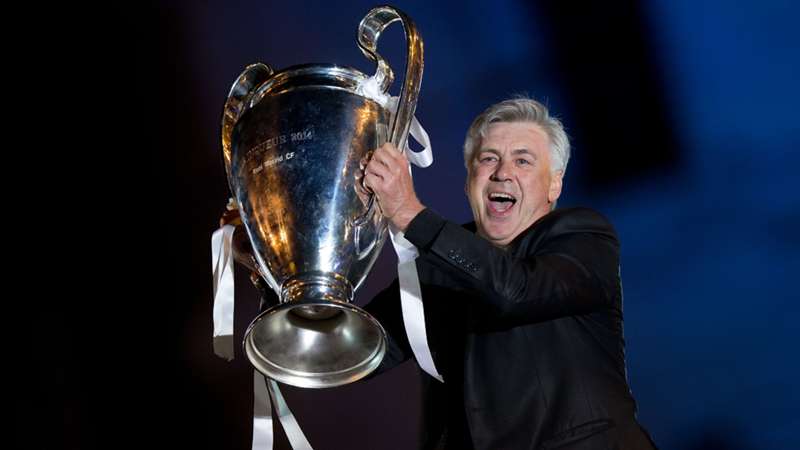 The Italian will be hoping to win a second UEFA Champions League trophy as Real Madrid manager on Saturday.

Carlo Ancelotti made history following his team's stunning 6-5 aggregate win over Manchester City in the semi-finals by becoming the first manager to reach the UEFA Champions League final on five occasions.

With three European Cup wins as manager, Ancelotti is no stranger to winning this competition, but now he is set to face one of, if not the, toughest challenge yet on Saturday when he tries to overcome a Liverpool team which has cemented itself as one of the best teams in world football.

However, being the underdog is a role his Madrid team have relished throughout this season's tournament, knocking out Paris Saint-Germain, defending champions Chelsea and Manchester City in the run-up to the showpiece game in Paris.

DAZN takes a look at the Italian manager's record in European finals ahead of a potential classic in the French capital.

Old Trafford was turned into Italy for a day when two of the country's biggest clubs, Juventus and AC Milan, went head-to-head for European honours.

Milan thought they had taken the lead in the first half through Andriy Shevchenko, but his effort was ruled offside after Rui Costa was deemed to have blocked Gianluigi Buffon's line of sight from an offside position, despite replays showing that the midfielder had moved out of Buffon's sight before the shot.

Andrea Pirlo also hit the bar for Milan in the first period, but those were the only clear chances in what was a tight 90 minutes.

A goalless extra time followed before Milan triumphed on penalties courtesy of successful attempts from Serginho, Alessandro Nesta and Shevchenko.

Two years after securing a sixth European Cup, Milan looked to make it seven against English giants Liverpool at the Ataturk Olympic Stadium in Istanbul, and at the end of the first half, it looked like the trophy would be coming back to Italy.

Two goals from Hernan Crespo and a goal from Paolo Maldini put Milan 3-0 up at halftime, but what transpired in the second half was one of the greatest comebacks in football history.

The game went to extra time, where Liverpool goalkeeper Jerzy Dudek produced an impressive double save from Shevchenko, and penalties. The Reds triumphed on this occasion 3-2 with Dietmar Hamann, Djibril Cisse and Smicer scoring successfully, while Dudek saved spot kicks from Pirlo and Shevchenko after Serginho blazed his penalty over the crossbar.

Two years on from the epic encounter in Istanbul, AC Milan and Liverpool met once again and this time Ancelotti was not going to let the Reds stop him from winning the club's seventh European title.

Milan took the lead at the end of the first half after Pirlo's free kick deflected off striker Filippo Inzaghi's upper arm and despite calls for handball, the referee let the goal stand.

The Italian side extended their lead in the 82nd when Inzaghi scored his second goal of the game after Kaka found the striker who rolled the ball into Pepe Reina's net.

Liverpool got a late consolation goal courtesy of Dirk Kuyt, but that wasn't enough to spur a comeback akin to 2005.

Milan instead held out and won 2-1 in Athens, claiming their seventh European Cup against the team which broke so many hearts just two years prior.

When Ancelotti arrived in the Spanish capital on a three-year deal in June 2013, the task was clear. Win La Decima, the 10th European title Los Blancos was craving since its last previous triumph in the Champions League 11 years earlier.

The experienced Italian coach went onto reach the final during his first season in charge, but now he had to overcome city rivals Atletico Madrid in Lisbon who were beginning to threaten the dominance of Barcelona and Madrid in La Liga.

Atletico took the lead in the first half with a Diego Godin header and it looked like Diego Simeone's team were on the brink of winning their first ever Champions League title, but then came Madrid Sergio Ramos who, in the 93rd minute, got on the end of Luka Modric's corner to put Los Blancos level and take the game into extra time.

As extra time progressed, Madrid's star power shone through. Gareth Bale put Madrid ahead in the 110th minute after firing in a rebound from Thibaut Courtois, who managed to save Angel Di Maria's inital effort. Marcelo then extended the lead to 3-1 eight minutes later before Cristiano Ronaldo scored from the penalty spot at the end of extra time after being fouled by Gabi.

Finally reaching this milestone relieved some pressure at Madrid, but to do it against a bitter rival made this victory all the sweeter for Ancelotti and his squad of players.