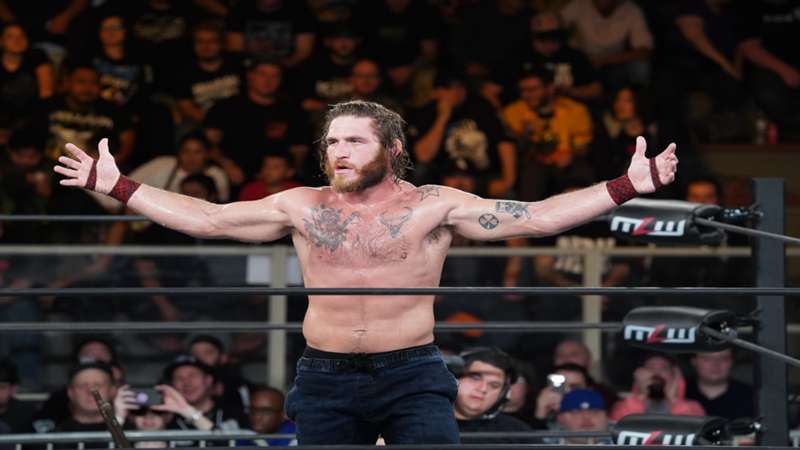 The MLW star speaks to DAZN News ahead of the "Filthy Island" special that premieres Wednesday on DAZN.

Coming up on the latest episode of MLW Fusion that can be seen Wednesday on DAZN at 7 p.m. ET, Tom Lawlor will be presenting "Tom Lawlor's Filthy Island Special'.

Days before the event goes down, the pro wrestling and MMA star sits down with DAZN News to discuss the event, what fans can expect, how he feels 2020 went for him and some of his goals for 2021.

(Editor's Note: This interview has been edited for length and clarity.)

DAZN News: How did the opportunity to do Filthy Island come about?

Tom Lawlor: After winning the MLW 2020 Opera Cup, as I was destined to do, I was presented with this opportunity to promote for the first time ever a show in my own image, and that is what I will present to you on the island.

DN: Can we expect what we have seen from your former boss at the UFC, Dana White, like "Fight Island' in Abu Dhabi? Or are we going to get something totally different?

TL: Well, this is what I would call an affordable location for many people on the island of Hawaii. But it's a little bit different than what you've seen from the UFC. It's a little bit more, I guess you would say affordable locale. You know, we didn't want to price out everybody and have them be restricted, based on international travel. So we've done our best to take some of the elements of Fight Island and bring those elements to you.

DN: What can we expect out of the Tom Lawlor's Filthy Island special? Are we going to get margaritas, coconuts, palm trees, some girls in hula skirts?

TL: There's definitely going to be palm trees, that's for sure. We have a full range of concessions ready to go. Some of the island delicacies like Spam, Huma Huma Nuku, Abba Wah. A lot of different items that are indigenous to the Hawaiian islands. We will also have Kalua Pork, and there's going to be tons of stuff by catering. Maybe there'll be some margaritas. It depends on what people like to drink. Maybe some Mai Tai's will be there. You asked about some women. There will be some hula skirts.

There's been rumors people have been talking and saying because it's in Hawaii, the locals are into this, that they back the Von Erichs, and they're not going to support this. But that's not true whatsoever. We're going to have men, women, children, fish, everyone and everything is going to be there supporting us. I can feel it. I can feel like they're going to come out of the woodwork.

I'm going to give you some insider information. We've actually secured the services of a local champion, 14-time[SM1]  Polynesian Pacific Champion, Mauna Loa will be in action taking on Dominic Garrini. Everybody out there who thought that we're not going to get some of the best fighters from around the world, we got the Brazilian Jiu-Jitsu gold medalist Dominick Garrini, 14-time Polynesian Pacific champion Mauna Loa. That's going to be a fight that everybody wants to see. And that's only one of many.

DN: Are you going to be in action?

TL: Well,  I'm going to be there overseeing things. Don't expect to see Filthy Tom get his hands dirty. There's a lot of things on my plate when it comes to promoting. Not too many people have been successful at not only being a good promoter, but even fewer have been successful at fighting on their own show and promoting. As a first time promoter, I don't want to take that chance. So I'm going to be there, but I won't be in action.

DN: Do you think there's more room for guys from the MMA world to make their transition into pro wrestling because we've seen Brock Lesnar go from wrestling to MMA and then come back. You started out in wrestling, and you went to MMA, and now you're doing both. Now you see "King Mo", who will be in the main event against Low Ki in a No Holds Barred Fight, making the transition retiring from MMA, and being in wrestling? Or do you think it's going to be far and few in between?

TL: This has been going on for however long the UFC has been around. Pretty early on in the UFC career of Ken Shamrock, he left the UFC to go to WWF. Dan Severn, kind of the same situation. So this isn't anything new. I love when people bring up like, oh, there's more MMA fighters doing wrestling now. Well, because there's more MMA fighters now. There's more wrestlers now. People say there weren't guys from the UFC doing wrestling in the 80s and 90s'. Well, the UFC wasn't even around. This is a sport that's been around for a short amount of time. There were plenty of boxers, and other professional athletes that went into wrestling and either did part-time or a full-time gig. It's just an extension of that. I don't think we're going to see any more, any less. I think it's been pretty constant throughout history.

DN: How was it to get back in the ring at the last set of tapings when you won the Opera Cup?

TL: Honestly, that was some of my favorite wrestling that I've done despite the fact that there's no crowd there. The Opera Cup last year and this year was based on competition and on trying to win the match. There wasn't a bunch of BS going on. It was guys wrestling each other, and that's one of the things that I excel at. I loved wrestling Rocky Romero, who will also be on Filthy Island, as I've extended the olive branch to him after the match. I thought he put on a great performance, pushed me to my limit. I like what I saw. I gave him the invite. So we'll see if he takes it. I think he will. He's a good guy. Oh. I love that match. The same with ole ACH and of course, the finals against Low Ki. These are the kind of matches I enjoy with a lot of mat wrestling and hard-hitting action. That's what I'm here for.

TL: All things considered, if I take a look at the goals and things that I had set out for myself to accomplish, not a whole lot of them happened. The point of this time, more I look at, the overall landscape and you know, overall things are most people accomplish them. I'm sitting in a pretty good place. I made it through what I think is going to be the harder part of the pandemic. I'm not worse for the wear. The 2020 Opera Cup is probably my favorite stuff in wrestling that I've done, so I can't look back on it and be upset with that. I'm happy with that. There's good and bad. I really don't like to rest on any sort of laurels. There's always going to be more for me to accomplish. If there's not, then I should probably stop.

TL: Honestly, my initial goal right now is to get as many eyes as I can on the Filthy Island show. This is something that when I say I produced it, I had a very large hand in the whole thing. Basically, I was in charge. I want people to watch it. I want people to have fun. I want them to be there on the island with me. Then we'll start focusing on everything else.

TL: You are going to see some of the best action that you've ever seen on MLW programming, probably the best MLW show that's ever been put on. It's all coming from my mind. This is my vision. This is what I want professional wrestling to be like and what I think it should be like, and what it will be like. Tune in to Filthy Island and have your socks blown right off into the water.