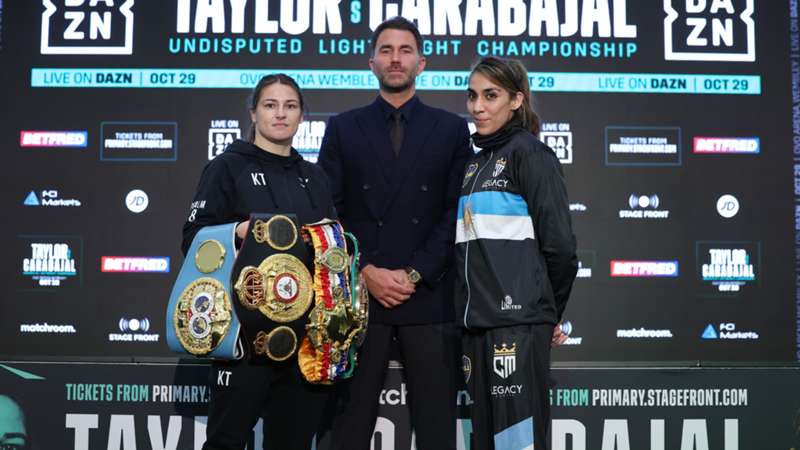 In his latest column for DAZN, Darren Barker claims Katie Taylor is not finished when it comes to her exploits in the ring.

On Saturday night, the undisputed women’s lightweight champion Katie Taylor is back in action against Karen Elizabeth Carabajal, and I for one am in awe of what she’s been able to achieve in her six years as a professional.

I spoke to Taylor at Wednesday’s media workout and her desire to keep going has left me very impressed and it’s clear that retirement is not in her thoughts just yet. She is a brilliant role model outside of the ring, so polite, no ego and as discussed in last week’s column, Taylor and Claressa Shields are arguably the pound-for-pound number one in women’s boxing.

When it comes to her fight against Carabajal on Saturday, I don’t give the Argentine much of a chance against Taylor. The only way she loses this fight is if something dramatic happens or Taylor slightly underperforms due to having one eye on the Serrano rematch.

Taylor is better than her opponent in every department. She’s quicker, has the better ring IQ and in my opinion punches harder. However, despite having just two stoppages on her 19-0 record, I did see some power in Carabajal’s punches during the media workout.

Regarding Taylor’s performance, I expect a faultless one. This is Carabajal’s big moment so there is no doubt she will leave it all in the ring and it doesn’t look like she has been overrun by the occasion as of yet.

Taylor shouldn’t worry too much about getting the stoppage, if it comes then great, but she should instead manage the 10-round distance and make sure she wins every single one. Enjoy it, stay out of trouble and take as minimal damage as possible, then look ahead to those huge fights without any lingering issues.

If Taylor does win on Saturday, there are myriad of options when it comes to what’s next. In the position she is in, Taylor holds all the cards and has the ability to demand these big fights. The Serrano clash in April was one of the best fights we’ve seen in boxing and a rematch between the two would certainly get the juices flowing.

But if a Serrano rematch cannot be made, there are a still number of big fights out there. Alycia Baumgardner is one of those options, if she manages to beat Choi Hyun-Mi to become the undisputed champion at super featherweight, there is always a chance Baumgardner could move up. Unified light welterweight champion Chantelle Cameron, who is in action next weekend against Jessica McCaskill, could also be a dance-partner for Taylor in the future. However, right now, a Serrano rematch at Croke Park in Ireland has to be the front runner in my opinion.

Retirement is a word that has been mentioned in the past few weeks when it comes to Katie Taylor and I for one believed we were at the beginning of the end when it came to her boxing career. But as previously mentioned, there doesn’t seem to be any contemplation about hanging the gloves up for good.

Taylor is intelligent enough to know when performances start to dip and whether her time is up. Right now however, it’s the total opposite, she is enjoying her boxing and claims we haven’t seen the best of her yet which is frightening. When a fighter is talking like that, it’s a clear indicator that retirement is not even on their radar.

At some point though, all good things must come to an end, and while the end doesn’t seem to be in sight just yet for Taylor, fans need to enjoy her career and achievements while they can because boxing will miss Katie Taylor when she’s gone.