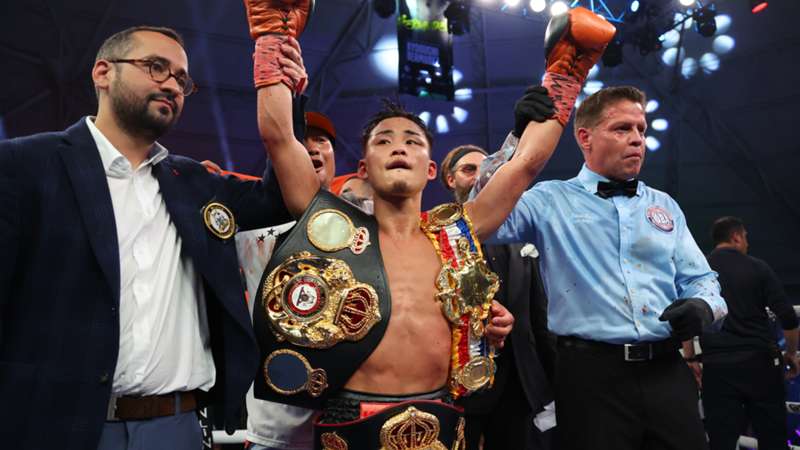 Ed Mulholland/Matchroom Boxing
Rewatch this fight, plus many more, on DAZN

The undefeated Japanese star made the fourth successful defence of his championship on Friday night.

Hiroto Kyoguchi was impressive in the headline slot on Friday as he retained the WBA light-flyweight championship against Esteban Bermudez in Guadalajara.

Japan's Kyoguchi came out on top of what was a bloody and embittered main event, which aired live on DAZN, and saw the champion penalised twice: once for headbutting and then for continuing to attack after he knocked the native Mexican down in the seventh, which effectively negated the extra point scored by dropping Bermudez.

However, Bermudez, who had his crimson mask checked by doctors but was allowed to fight on, would not last much longer.

The champion, evidently seething over the turn of events that some spectators blamed on the official being slow to acknowledge the knockdown, flew out of the blocks to begin round eight with the intention of finishing what he had started as quickly as possible.

And a flurry of unanswered lands left the official no choice but to withdraw the challenger for his own safety, giving the 28-year-old Kyoguchi his fourth successful defence of the belt.

He now moves to 16-0 on a week where his good friend and DAZN pound-for-pound top-three ranked Naoya Inoue obliterated one of his toughest previous opponents, the great Nonito Donare, in their bantamweight unification rematch in Saitama.

You can watch highlights of the full card on DAZN Boxing's official YouTube channel below, and re-live the entire show in full, as well as upcoming fight cards including Jaime Munguia vs. Jimmy Kelly and Jesse 'Bam' Rodriguez vs. Srisaket Sor Rungvisai, with a DAZN subcription.