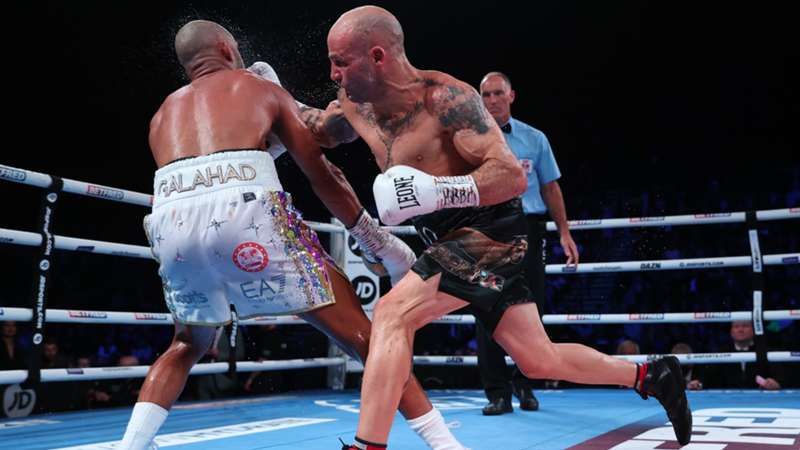 Watch Galahad vs. Martinez on DAZN

SHEFFIELD, ENGLAND — Kiko Martinez shocked Sheffield and the boxing world after knocking out Kid Galahad in the sixth round to win the IBF  featherweight title.

However, Martinez struck in the closing seconds of the fifth round with a right hook which sent Galahad to the canvas. The hometown kid was able to rise and meet the referee's count as the closing bell rang.

Then within the opening seconds of the sixth, Martinez threw another right hook, and this time it kept Galahad down, bringing the fight to an abrupt end.

KIKO MARTINEZ KNOCKS OUT KID GALAHAD WITH THE FIRST PUNCH OF THE SIXTH ROUND!#GalahadMartinez pic.twitter.com/ztiAREQKyo

Before the fight, Galahad vowed to 'do a job' on Martinez, and it looked like he was achieving that. Throughout the opening five rounds, Galahad was landing clean shots, lethal combinations, and powerful uppercuts, which seemed to be taking their toll on Martinez, who looked shaky at times.

Like Mauricio Lara's win against Josh Warrington last February, this win for Martinez came out of nowhere and shook British boxing.

But Martinez's win wasn't the only shock of the night as Alycia Baumgardner stopped Terri Harper in the fourth round to claim the WBC and IBO super featherweight titles.

Just seconds after sending him the canvas in the previous round, Kiko Martinez knocks out Kid Galahad within the opening seconds of the sixth.

Galahad was on top throughout the fight, but two quick and powerful right hooks from Martinez swung the fight in his favor, and now the Spaniard is a two-weight world champion.

Galahad vs. Martinez: Round Five

Kiko Martinez knocks down Kid Galahad in the final few seconds of round five with a powerful right hook.

Galahad makes the referee's count, and luckily the bell signaled the end of the round.

Galahad vs. Martinez: Round Four

Kiko Martinez looks jaded and will do well to hear the final bell.

Galahad vs. Martinez: Round Three

Kid Galahad continues to wear down Kiko Martinez. The Sheffield fighter will be looking to finish this within the distance.

Galahad vs. Martinez: Round Two

The Spaniard is already showing signs of tiredness.

Galahad vs. Martinez: Round One

Kid Galahad said before the fight he would 'beat up' Kiko Martinez and he is doing exactly that.

He's established the jab early and his body shots are already taking their toll on Martinez.

The hometown crowd is also enjoying Galahad's physicality so far as chants of 'Barry' ring around the Utilita Arena.

Alycia Baumgardner is the new women's WBC and IBO super featherweight champion after silencing the pro-Terri Harper crowd at Sheffield's Utilita Arena with a right hook that stunned Harper in the fourth round, which forced referee Mark Lyson to stop the contest.

While many before tonight predicted an easy night for Harper, Baumgardner wasn't afraid to mix it with the former WBC and IBO super featherweight champion. The American was dangerous throughout the fight.

Full credit to Baumgardner, who said she would shock the world, and she has certainly done that tonight.

As expected with any Billam-Smith fight, it was a physical affair, and while Bregeon looked more mobile than the champion, Billam-Smith slowly went through the gears as the fight progressed.

In the second half of the fight, Billam-Smith's shots had a lot more power behind them and caused Bregeon to tire. The Frenchman had slowed down considerably compared to the opening rounds and looked very shaky on his legs in the final stages.

Billam-Smith was the unanimous winner on the judges' scorecards with one card scoring the contest 120-109 and two cards with a 119-109 score.

After spending the first round finding out what the Scotsman was bringing to the table, Dixon went to work, hurting his opponent in the second round and never looked back.

McCorry got more tired as the fight went on and was knocked down in the sixth round.

After meeting referee Howard Foster's count, it was clear McCorry was going to do well to hear the final bell with Dixon landing plenty of clean shots.

Once the final bell sounded, Dixon was the obvious winner against a stumbling McCorry who was swinging and missing in the final two rounds.

For Dixon, this was a perfect performance in his development as a pro and now extends his record to 6-0.

Dom Hunt and James Flint produced a bruising 10-round thriller for the vacant Central Area welterweight title in front of a raucous Sheffield crowd.

No knockout bonus for either fighter, but it was a hard-hitting contest with both men going for it in a perfect opener for what should be an action-packed night.

Flint was relying on his combinations, while his opponent Hunt was looking to seize the initiative by controlling the center of the ring and forcing Flint onto the ropes.

Both men went on to hear the final bell, and it's Hunt who claims the vacant 147lb belt after referee Steve Gray scored the contest 98-93 in his favor.

Hello and welcome to Sheffield

Good evening and welcome to the Utilita Arena in Sheffield, England, where Kid Galahad makes the first defense of his IBF world featherweight title against Spain's veteran Kiko Martinez.

Tonight's main card gets underway with James Flint and Dom Hunt going head-to-head for the vacant Central Area welterweight title. Eddie Hearn raised the stakes for this fight at Thursday's press conference by doubling the purse for whoever wins via knockout.

Stay tuned to DAZN News for updates throughout the night.