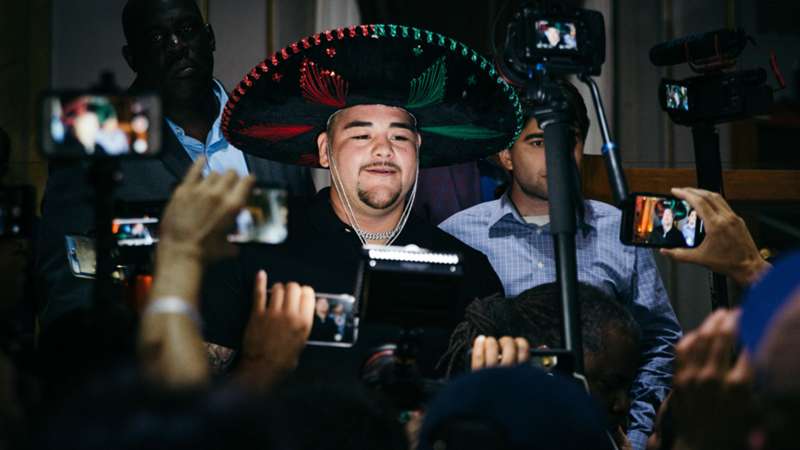 The unified world heavyweight champion feels like he's the reigning people's champ in boxing and beyond entering his rematch with AJ.

Andy Ruiz Jr. repeatedly brings a balled-up tissue up to his forehead to pound the beads of sweat before they trickle down to his face.

A throng of reporters wrapped around him just finished firing questions at the unified world heavyweight champion in a scrum. Ruiz is now fielding one-on-one queries from those perched a couple of steps above, yet the media below hasn’t dissipated. Instead, they’re hanging tight, their eyes peered onto him. Ruiz doesn’t mind, steadily answering every inquiry, while keeping a smile on his face.

This scene from the Ruiz-Anthony Joshua II press tour stop at the Capitale event space in New York City late last week exemplified Ruiz’s new normal. Ever since he defeated Joshua by seventh-round TKO at Madison Square Garden on June 1 to become the first Mexican to be crowned world heavyweight champion, people have been drawn to him like moths to a flame, all wanting a piece of the champ.

There was his appearance on Jimmy Kimmel Live, where he further won over the hearts of people — both boxing fans and beyond — and he watched his Instagram account balloon to a current 1.1 million followers as somewhat of a newfound people’s champ.

Entering his rematch against Joshua in Diriyah, Saudi Arabia, on Dec. 7, Ruiz would like nothing more than to repeat the whirlwind rush of a post-fight press tour and all the adulation that comes with it via another win. Not to mention, silence any lingering critics in the process who still aren’t convinced he's an elite heavyweight after he knocked Joshua down four times en route to a TKO in their first meeting.

“It will be amazing,” he told DAZN News, envisioning another emphatic victory. “I feel like I still need to shut people up — people that are not believing in me, all the doubters, all the haters. I think that’s what gives me more motivation to go even harder, to prepare myself even better and to end the fight exactly how I ended it June 1.”

With that motivation, comes pressure, too, but not as much pressure as the kind Joshua is shouldering on his chiseled 6-6 frame, according to Ruiz. The “Destroyer” believes a sizable chunk of AJ’s fans have switched sides and are now rocking with him. Because of that, he believes there’s more pressure on Joshua to take back his four titles (WBA, WBO, IBF, IBO) than there is for Ruiz to retain them.

Whether Ruiz meant a slimmer-looking “AJ” by the latter, the champ didn’t expound. He, too, has pressure on him, but the 29-year-old father of five insists it’s a different kind of energy.

“So, I think that’s all I think about is my kids and their futures. I have to win, and I do this for them.”

He has already seemingly secured their futures financially with his win June 1 and his purse for the Dec. 7 rematch. Winning the latter could spell a generational wealth that Ruiz craves as much as his next Snickers.

Seeing an already slimmer Joshua in September has given Ruiz the motivation to enter the “Clash on the Dunes” in better shape as well. That probably means less Snickers and defying the chocolate bar’s mantra of “You're not you when you're hungry.”

“That’s the goal right now to be at 255, 257 (pounds),” he said. “I want to get a little bit down to where I’m comfortable. At that weight, when I fought 267, I was a little heavier, but I did that on purpose because I wanted to be strong. I wanted to be able to carry [Joshua's] weight.

Joshua called the left hook that Ruiz first dropped him with in the third round a “punch from the Gods” and later the “perfect punch.”

When the two met face-to-face for the first time since that night, the new champion agreed with the former champ and let him know about it.

“When we’re in Saudi Arabia (during the first stop of the Ruiz-Joshua II press tour), just telling him that I know he’s going to be ready,” Ruiz said. “I know he’s going to be focused, and I was telling him that’s just giving me more motivation, telling me that punch was from the Gods, and I agreed with him that was from the Gods because I’ve been praying for this all my life, man. That’s why I give God all the glory because I wouldn’t be there without him.”

The three legs of the media tour came and went without much trash talking from either party, as the two fighters enter the rematch shrouded in respect for each other. Just like it took Ruiz getting up from that third-round knockdown to become champion, the champ respects the way Joshua kept fighting through his knockdowns as well.

That being said, Ruiz vows that history will repeat itself in less than three months.

"Even though if it seemed like he didn’t want to fight, he kept getting up," Ruiz said of Joshua. "We either have it in us or not. He’s a warrior, dude. There’s nothing bad to say about him besides I’m going to win again Dec. 7."