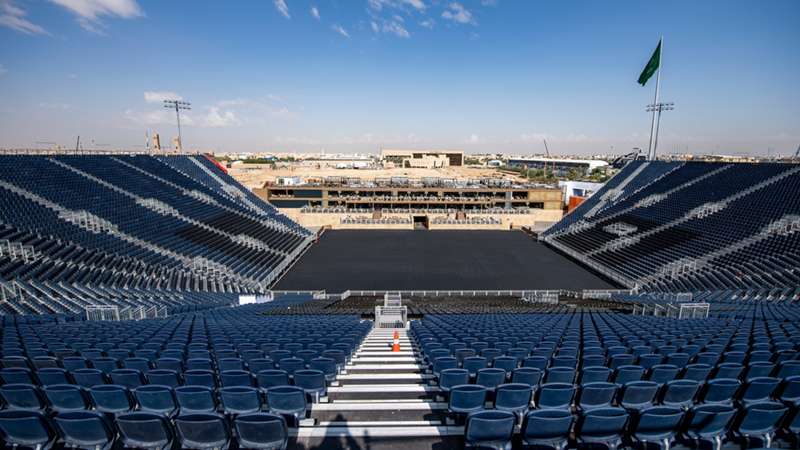 The custom 15,000-seat arena is ready for the Ruiz vs. Joshua rematch.

Everything's a go for the "Clash On The Dunes."

Anthony Joshua arrived at King Khalid International Airport in Riyadh, Saudi Arabia, over the weekend, and Andy Ruiz Jr. touched down soon thereafter in advance of their highly anticipated rematch for the unified world heavyweight titles in Diriyah, live on DAZN, on Dec. 7.

The newly constructed Diriyah Arena, which will host their second clash, is all set and ready for action in what's sure to be a memorable night of boxing.

Fans on fight night will be greeted by this majestic entrance.

The custom 15,000-seat arena's backdrop features a beautiful view of the Riyadh skyline.

Shortly after landing in Saudi Arabia, Joshua visited the Diriyah Arena to take in where he'll attempt to regain the WBA, WBO, IBF and IBO heavyweight titles from Ruiz, who shocked AJ via a seventh-round TKO back on June 1.

“It’s going to be an incredible night and I’m thrilled so many of my fans are going to be there, particularly from the UK," Joshua said in a Matchroom Boxing press release. “It’ll definitely be a night people will tell their grandchildren they were at, one of those iconic evenings of boxing. Everyone from Saudi has been brilliant to work with."

In support of Ruiz-Joshua 2, there will be a Diriyah Music Festival taking place around the boxing bout.