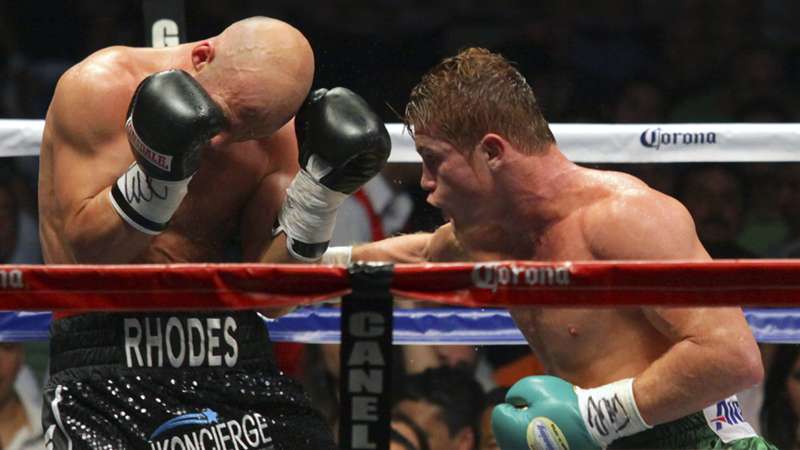 Canelo has built himself quite a reputation for defeating British boxers. DAZN speaks to those who've been faced with the momentous task of trying to bring down boxing's best fighter.

Saul 'Canelo' Alvarez will face his seventh British opponent this coming Saturday, live on DAZN worldwide (except Mexico), when he puts his WBA, WBC and The Ring super-middleweight belts up against the WBO version held by the undefeated Billy Joe Saunders. His record vs. Brits so far reads 6-0 (4 KOs).

We reached out to two previous British victims of the pound-for-pound global boxing superstar, as well as trainer Dave Coldwell, who was in the corner of another.

Here's what they had to say about the experience.

Callum Smith: Lost on points to Canelo Alvarez in December 2020

“He was just so hard to hit clean. I couldn’t land anything on him. In an ideal world, I would’ve liked to have had more than five weeks preparation for him because you want as many advantages as possible when you’re facing someone like Canelo.

“I’d been there when our Liam fought him and I thought he had a few moments of success. I’ve got a similar style to our Liam but obviously have a bigger frame so I was confident I would get moments in the fight but once you get in the ring with him then you realise just how good he is.

“The first couple of rounds were pretty quiet in the fight so I didn’t appreciate just how good he was until the fight went longer. He’s always stalking very patiently and you can see him always thinking. He rarely makes a mistake and you know he’s just waiting for you to commit so he can come back right away with a counter shot.

“I’m an experienced fighter with a long career in the amateurs and pros and I’ve got no doubt at whatsoever that Canelo is the best fighter I’ve ever been in the ring with. Finding a weakness in him is so hard and even when you do think you can exploit something, getting it done is another thing when you’re eventually in the ring with him.”

Dave Coldwell: Was in corner of Ryan Rhodes when he was stopped by Canelo in 2011

“I’ve been in the corner trying to take on Oleksandr Usyk, Naoyo Inoue, Terrence Crawford when Billy Nelson asked me to help out, and Canelo Alvarez. There’s not much between all of them but I can say that Canelo is a very special fighter.

“Before Ryan faced him, I always knew that Canelo was going to be special. From the moment he touched down in Mexico it was what it’s like over here with Wayne Rooney and David Beckham. He was on the front cover of gossip magazines out there and it was then I realised just how important a figure he is in Mexico.

“Although Canelo has gone on to become the best fighter in the sport, at the time, his best wins were against the likes of Carlos Baldomir and Lovemore N’Dou. I remember his fight with Jose Cotto and there was a moment where he was shook and his legs went and I thought that Ryan could exploit that because he was a slick fighter who could position himself to land good shots. From the moment the first bell went, I knew how hard it was going to be.”

“Canelo rarely wastes a shot and his defence was something that really impressed me. If he ever makes a mistake in a fight then you know it won’t be made again because he makes a big effort to always improve himself.

Ryan was a good fighter who I thought had a really good chance of causing a huge upset because of how experienced he was and because was still a young fighter learning the sport. I found out that night just how good he is and it’s no surprise to me at all on what he’s gone on to achieve in the sport.”

Matthew Hatton: Lost to Canelo on points in the Mexican’s first world title fight back in 2011

“Before the fight with Canelo I was absolutely flying as European welterweight champion and looking back I probably should've waited for one of the welterweight world champions but the chance to fight Canelo was just too good.

“I had a look at him in the build-up and the one thing I thought I could exploit was his footwork. I thought he had slow feet and I’d be able to just jump in and fight my fight at close distance. Seeing a fighter on video is totally different though and I learnt after one or two rounds just how special a fighter he was because he seemed to have an answer for everything.

“His size was something that made him so hard to fight against as well. As I’ve said, I was a welterweight going to light-middle to take on one of the biggest prospects in boxing. I thought I had experience and age on my side, but whatever I thought I had going for me was quickly taken away because of how good he is.

“Kell Brook was a brilliant fighter at the end of my career and I rate him very highly but I’ve got to say that Canelo was the best fighter I ever got in the ring with. I was at the peak of my powers going into that fight. Ranked highly in the top 10 and on a great run, but there was just nothing I could do against him because he just seemed to have an answer for everything.”

Can Saunders break the British duck against a man who has only lost once so far, to the 50-0 legend Floyd Mayweather Jr.? Find out live Saturday May 8 on DAZN everywhere except Mexico.