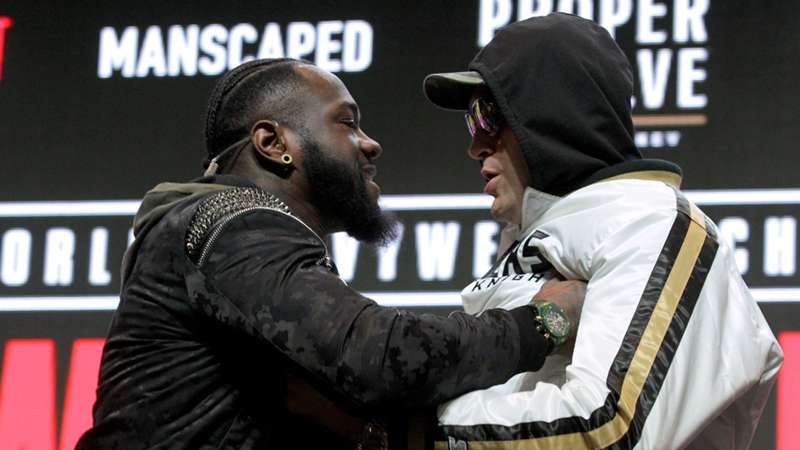 Deontay Wilder and Tyson Fury square off for Wilder's WBC heavyweight title. Here's everything you need to know about how to buy the pay-per-view event.

The first mega-fight of 2020 goes down Saturday night at the MGM Grand Garden in Las Vegas, as Deontay Wilder defends his WBC heavyweight title against lineal champion Tyson Fury.

Wilder and Fury, of course, battled once before, going to a split draw in December 2018 in a memorable fight. Instead of an immediate rematch, however, Fury signed a co-promotional deal with Top Rank, and Wilder and Fury subsequently each fought twice in 2019.

Wilder (42-0-1, 41 KOs) knocked out Dominic Breazeale in the first round and knocked out Luis Ortiz in the seventh round. Meanwhile, Fury (29-0-1, 20 KOs) defeated Tom Schwarz via third-round TKO and beat Otto Wallin by unanimous decision.

Who will emerge victorious in Wilder vs. Fury 2 and leave "Sin City" with the gold and claim to be the best heavyweight on the planet?

The @BronzeBomber defends his WBC heavyweight belt against @Tyson_Fury, in the rematch we've all been waiting for, 9pm ET on PPV.

Here's everything you need to know about how to watch the fight, including the pay-per-view information.

Deontay Wilder vs. Tyson Fury 2: How much does pay-per-view cost?

Deontay Wilder vs. Tyson Fury 2 is available on ESPN+ and the Fox Sports app at the pay-per-view cost of $79.99. For those wanting to watch on ESPN+, you'll also need a subscription for that streaming service. (The fight plus the first month of the ESPN+ plan for new subscribers is $84.98.)

You can also order the event through cable or satellite providers for $79.99.

Wilder vs. Fury 2: How to watch, live stream the fight

Wilder vs. Fury 2 is available on ESPN+, the Fox Sports app and major cable and satellite providers in the United States.

ESPN+ and Fox Sports can be streamed on Amazon Fire TV, AppleTV, Google Chromecast, Xbox One, Roku, iOS and Android devices, many smart TVs, as well as web browsers. ESPN+ is also available via Playstation 4.

Can I stream Wilder vs. Fury 2 without cable?

The Wilder vs. Fury 2 fight can be streamed without cable or satellite service. Options include the Fox Sports app, ESPN+ as well as Sling TV in the United States. Click on any of those links for ordering and complete viewing information.

Can I watch Wilder vs. Fury 2 for free?

The main card of Wilder vs. Fury 2 is available only via pay-per-view. However, the undercard fights are available via traditional ESPN and Fox platforms. The early prelims, beginning at 5 p.m. ET, are on the ESPN and Fox Sports apps. The next set of prelims begin at 7:30 p.m. ET and are on ESPNNEWS and FS1. At 8 p.m. ET, the prelims continue on ESPN and FS1.

The Deontay Wilder vs. Tyson Fury rematch fight will take place Saturday, Feb. 22. A preshow begins at 7 p.m. ET followed by the undercard at 7:30 p.m. ET. The pay-per-view main card is set to begin at 9 p.m. ET. Expect Fury and Wilder to make their ring walks for the main event at 11 p.m. ET at the earliest, although the fight could start after midnight depending on the length of the earlier fights.