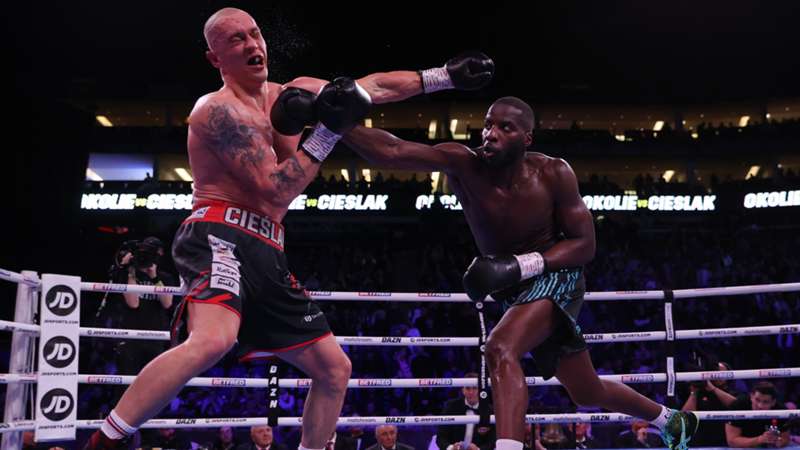 Watch this fight on DAZN (Except AUS & NZ)

It was the first time Okolie had gone the full distance in his professional career and it was a messy affair.

Looking to use his extra three inches in reach, Okolie was hoping his trusty right hand could end the fight early. There were times where it seemed to be having an effect early on and it looked like the end was near for Cieslak after he was knocked down in the fifth round.

While Okolie sniffed blood, Cieslak looked to nullify the defending champion, frequently engaging in clinches in the hope of draining the energy out of the Rio 2016 Olympian.

As the fight reached the latter stages, Cieslak began to show signs of tiredness and poor discipline by throwing a number of punches to the back of the head.

Despite a valiant effort in the final round to try and end the fight, it was obvious that Cieslak hadn't done enough to become a world champion at the second time of asking.

Another successful world title defence for @Lawrence_tko, is it time to unify? 👑@autozone pic.twitter.com/x39D9kVxOT

It will be interesting to see what Okolie decides to do next.

There is a possibility he could face Mairis Briedis, who was ringside tonight, in a unification fight or if that doesn't materialise, Okolie could finally make the move up to heavyweight.

Re-live the whole night on DAZN which included Galal Yafai's professional debut and an unbelievable comeback from Jordan Gill to win the European Featherweight title.

Okolie vs. Cieslak: Round 12

The fight goes the full distance.

Both men left it all in the ring in the final round, throwing punches left, right and centre.

The judges scorecards will be imminent.

Okolie vs. Cieslak: Round 11

Cieslak is beginning to look desperate.

Cieslak is frequently tying up Okolie and is managing to get away with a few punches to back of the head.

It's Okolie though who is still dominating the fight.

Okolie vs. Cieslak: Round 10

Cieslak is starting to look more stationary as tiredness is setting in.

Okolie vs. Cieslak: Round 9

This is uncharted territory for Okolie whose previous fights have never reached the ninth round.

Cieslak will have to look for a stoppage if he wants any chance of winning.

Okolie vs. Cieslak: Round 8

Cieslak is doing everything in his power to frustrate Okolie.

Cieslak is sometimes able to defend himself against Okolie's right hand, but the WBO champion is still finding ways through the challenger's defence and landing some clean shots.

Okolie vs. Cieslak: Round 7

Cieslak went on the offensive in round seven.

For the first time in this fight, Cieslak caught Okolie who took the Polish challenger's punches well.

Okolie vs. Cieslak: Round 6

It's no secret that Okolie is searching for the finish.

The defending champion is utilising the extra three inches he has in reach, while Cieslak is finiding little success whenever he goes on the offensive.

Okolie vs. Cieslak: Round 5

Cieslak is knocked down for the first time after being on the wrong end of an Okolie right hand.

The WBO champion sensed an ending could be near and continued to unload on Cieslak after meeting the referee's count.

Okolie rocked Cieslak with another right hand in the closing stages.

Okolie vs. Cieslak: Round 4

Cieslak's best round so far.

The Polish challenger stepped up the pressure on Okolie whose shots are aren't landing clean.

Okolie vs. Cieslak: Round 3

Despite a raucous Polish support, Okolie is frustrating Cieslak.

The Brit is targeting his opponent's body in the hope of finding an opening.

Okolie vs. Cieslak: Round 2

Cieslak is trying to restrict Okolie by frequently clinging onto the defending champion.

Okolie vs. Cieslak: Round 1

Fight fans are set for a slugfest.

Both men engaged in a tussle in the centre of the ring before Okolie stunned Cieslak with a right hand.

The Polish fighter had to use the ropes for support to allow time to recover.

The WBO world cruiserweight champion Lawrence Okolie has made his way to the ring for his fight with Michal Cieslak.

He was joined by Anthony Joshua and UFC middlweight champion Israel Adesanya during his ringwalk.

Not long now until this main event contest gets underway.

Anthony Joshua is in the building

He spoke to DAZN's Chris Lloyd about the action so far.

Olympic hero Galal Yafai has began his professional career with a win.

With a minute or so remaining in round five, Yafai finally floored Bautista.

Despite meeting the referee's count, Bautista's corner threw in the towel which signalled the end of the contest.

A masterful pro debut from @galal_yafai who gets the fifth-round stoppage and claims the WBC International Flyweight Title 🏆#OkolieCieslak pic.twitter.com/8E05CcrRgK

Jordan Gill is the new European Featherweight champion after knocking out Karim Guerfi in round nine.

It looked like the end was near for Gill who after being knocked down in round seven, struggled to keep steady legs and was backed into his own corner by Guerfi.

However, after enduring a barrage for the following two rounds, Gill produced a devestating punch out of nowhere to knock out Guerfi, an unbelievable turnaround from the Englishman.

Anthony Fowler's journey in the middleweight division has begun with a points win over Lukasz Maciec.

It took a few rounds for Fowler to get into a rhythm, but once he did, the Liverpudlian seized control.

Fowler's superior conditioning paid dividends against Maciec who was showing signs of tiredness in the final three rounds.

While Fowler has returned to winning ways, there are plenty of improvements to be made for future fights.

Slight delay to Fowler vs. Maciec

There is a slight delay to Anthony Fowler's middleweight debut.

His opponent, Lukasz Maciec, has been ordered by the British Boxing Board of Control to remove a temporary tattoo.

Fabio Wardley has beaten Daniel Martz after the American was unable to continue in the second round.

Wardley got off to a slow start as expected in the opening round, but the Ipswich man showcased his power in round two sending Martz to the canvas in the opening stages.

Despite Martz's determination, he was sent to the canvas for a second time following a clubbing left hand from Wardley and after signalling a problem with his ear, the contest was brought to an end.