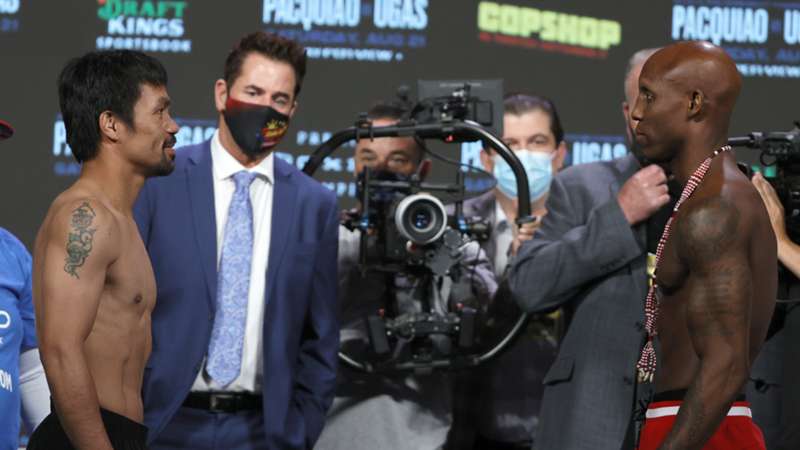 Manny Pacquiao and Yordenis Ugas saw each other for the final time before Saturday's WBA (super) welterweight title clash.

Before the bell sounds, Pacquiao and Ugas went face-to-face one last time at Friday's weigh-ins to make the fight official.

Ugas tipped the scales first, weighing in at the welterweight limit of 147 pounds.

Then Pacquiao came onto the scale and came in one pound below Ugas at 146. However, unlike Wednesday when Pacquiao and Ugas had a tense face-to-face staredown, this time around, both participants were cordial and went without incident.

Initially, Pacquiao was set to face unified champion Errol Spence Jr. Spence was forced to pull out due to a retinal tear. Ugas was set to be in the co-main event against Fabian Maidana. But Maidana also suffered an eye injury, so Ugas got bumped up to the headlining position against boxing's only eight-division world champion.

Even though Ugas isn't Spence, that doesn't mean the 42-year-old is overlooking the 2008 Olympic bronze medalist out of Cuba.

"I’m not taking this fight lightly," Pacquiao said immediately after the weigh-in. "Of course, I don’t want to be overconfident in this fight. But I want to make sure that tomorrow night I bring home the victory. God willing, the fans will be happy."

The central theme heading into the fight is the possibility of this being the final time Pacquiao competes. While he didn't divulge if that's the case, Pacquiao vowed to give it his all once he steps through the ropes.

"Tomorrow night, I will do my best," Pacquiao said. "I’ll give my best to the fans and, of course, for my country. This fight will be dedicated to the Phillippine people."

The champion never tips the scales first but this is a Manny Pacquiao so Ugas will be first. The 2008 Olympic bronze medalist comes in right at the welterweight limit of 147 pounds.

Boxing's only eight-division world champion is next. Pacquiao steps on the scale and weighs 146 pounds.

We officially have a fight!!!

Waiting on Pacquiao and Ugas

facebook twitter whatsapp
There will be a break for a few minutes before Manny Pacquiao and Yordenis Ugas make their way to the stage.

facebook twitter whatsapp
Making their way to the stage next is former welterweight champions Victor Ortiz and Robert Guerrero.

Ortiz, who returns from a two-year layoff weighs 148 pounds, which is one pound over the limit.

Guerrero is next and makes weight, coming in at 146.75 pounds.

facebook twitter whatsapp
Coming up next on to the stage are featherweights Julio Ceja and Mark Magsayo.

Ceja is first and comes in at 125 pounds. Magsayo, who is a Manny Pacquiao disciple weighs 125.5.

Really looking forward to this one. Should be a fun scrap.

Carlos Castro and Oscar Escandon kick off the PPV portion of the card in junior featherweight action.

Escandon weighs in first and comes in at 125.75 pounds. Castro follows Escandon and is slighly lower at 125.5 pounds.

facebook twitter whatsapp
Welcome to DAZN News' live coverage of the Manny Pacquiao vs. Yordenis Ugas weigh-ins. Stay locked in for what could be the final weigh-in of Pacquiao's historic career.