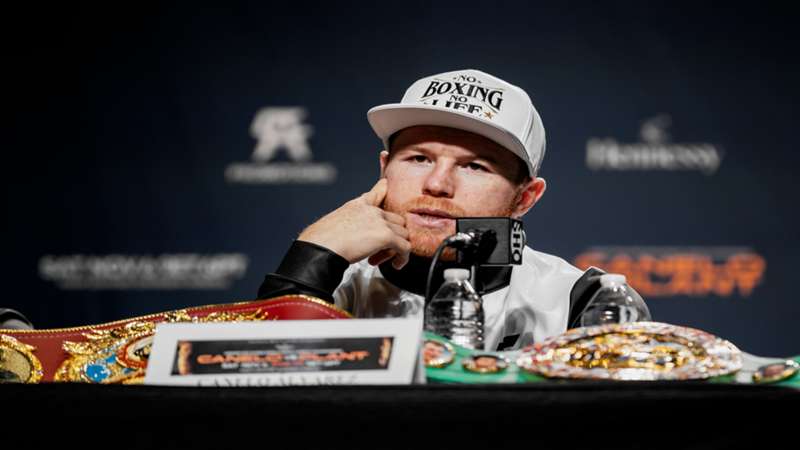 The Mexican four-belt champion was ready to move on after the ill-tempered buildup.

Saul ‘Canelo’ Alvarez has declared his feud with Caleb Plant over after the Mexican defeated Plant last night in Las Vegas.

Plant arrived in the ring as the IBF champion, with Canelo in possession of the WBA, WBC and WBO belts at super middleweight. Whoever won would emerge as the first-ever, four-belt undisputed champion at 168 lbs.

Canelo was impressed with Plant's doughty resistance, though the Mexican’s superiority was clear long before the 11th round stoppage.

The pair had exchanged words - and slaps - in the buildup to the fight and it was one of the most bad-tempered preparations in recent years for Canelo. However that is now water under the bridge, he said after the fight.

"Definitely my respect for Caleb Plant, he's a very difficult fighter, he had a lot of ability," said Canelo.

"I do respect the fighter.

"He did say sorry, that he didn't mean it that way. Everything is okay."

The new champion explained how trainer Eddy Reynoso guided him through the clash.

"He was making it a little difficult, but Eddy told me to stick with the gameplan, the last two rounds, and at the end I got him," he explained.

"That's the way it had to finish. He was already very hurt.

"It hasn't been easy to get to this point, but with your support, my family, my team, we've got really far.

"This is for everybody, especially for Mexico. It's another win for our team, but we did it tonight.

"There are only six. It keeps me happy, very motivated to be one of the six undisputed champions of the world."

Canelo has been quizzed about a return to light heavyweight, or possibly even cruiserweight, in pursuit of more belts, but he was non-committal.