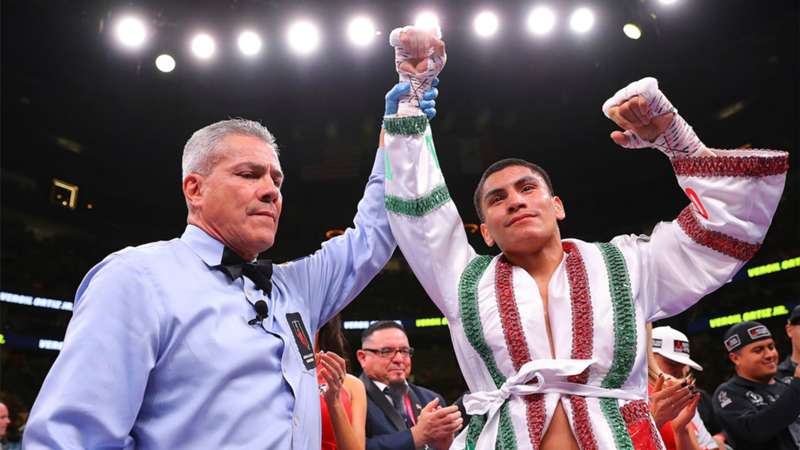 Vergil Ortiz Jr. talks about the first time he met Travell Mazion and plans to dedicate his next fight against Samuel Vargas to the memory of the fighter who died on Wednesday evening.

The boxing world was crushed by the news of the untimely death of Travell Mazion on Wednesday evening. The rising 154-pound talent was reportedly killed in a multi-vehicle crash in Austin, Texas.

Mazion (17-0, 13 KOs) had a bright future ahead of him as part of Golden Boy Promotions. While the boxing world is still reeling, Mazion’s stablemate Vergil Ortiz Jr. has plans to honor his friend and will dedicate his July 24 fight with Samuel Vargas to the late fighter.

“I would love to dedicate this next fight to him,” Ortiz told DAZN News. “He deserved so much more in the world. He wasn’t just a great boxer, but he had all of the attributes of a great person and is such an unfortunate thing to see his life taken away.”

Ortiz (15-0, 15 KOs) said that he will step into the ring against Vargas with a heavy heart but will carry the influence that Mazion had in his life with him next Friday.

The two met in 2019 when both were on the same show in Grand Prairie, Texas. Ortiz stopped Antonio Orozco in the sixth round of the main event while Mazion defeated Jeremy Ramos on the undercard.

“I had never met the guy before, but as soon as we met we were laughing and talking like we knew each other for years,” Ortiz said. “I never hit it off faster than Travell. It’s a shame that we didn’t hang out more after. Not only was a good boxer and a good person, but he was also a great showman. I was entertained when I watched him fight. He was very charismatic.”

Mazion turned pro in 2013 and won his first 11 fights by knockout. He claimed the WBC-NABF super welterweight title in January with a 58-second knockout against Fernando Castaneda and certainly had a bright future ahead of him.

The news comes just nine days shy of Mazion’s 25th birthday. Details of the wreck were still unclear on Thursday, but an outpouring of love and support immediately hit social media after the news of his death was made public.

I can’t believe it, R.I.P Travell Mazion. For those who don’t know him or never met him, he was a very talented boxer and one of the coolest people I knew. Always enjoyed watching him fight. Love you bro, watch over us pic.twitter.com/l18382txaS

“We at Golden Boy are deeply saddened by the tragic passing of Travell Mazion last night,” Golden Boy said in a statement released to DAZN News. ”Mazion was a kind, charismatic young man who lit up every room he walked into and brought excitement to fans inside the ring. We send our heartfelt prayers and thoughts to his family. May he rest in peace.”