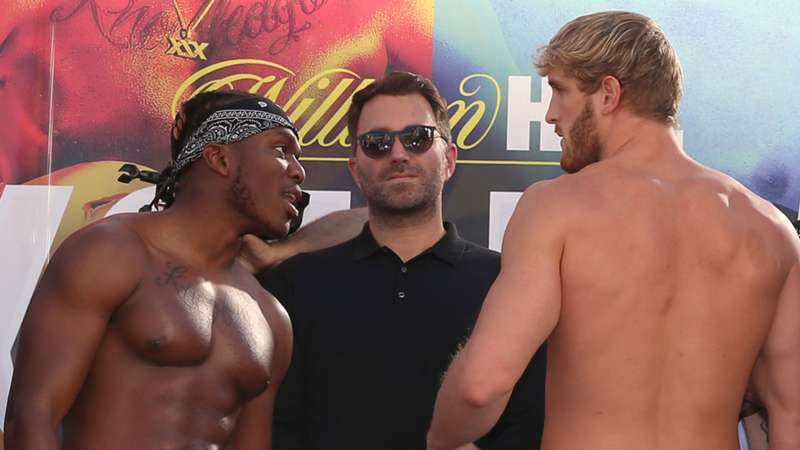 Logan Paul and KSI have a boxing rematch on Nov. 9 to settle their score once and for all.

YouTube personalities Logan Paul and KSI meet in a highly anticipated rematch on Saturday, Nov. 9, from the Staples Center in Los Angeles, live and exclusively on DAZN.

Their first fight, deemed the "biggest amateur boxing match in history," at Manchester Arena in Manchester, England, went to majority draw, with two judges scoring it 57–57 and the other 58–57 in favor of KSI. The fight was streamed on YouTube’s pay-per-view service and generated over 1 million viewers to become the largest non-professional boxing match of all time in terms of paying viewers. This time around, KSI and Paul will be competing professionally.

KSI, whose real name of Olajide William Olatunji, is a British internet personality. He has over 20 million subscribers on YouTube and nearly 5 billion views on the platform.

“Finally, after over a year since our rematch, I get to enter the ring once again to fight Logan Paul,” KSI said. “If I’m being honest, I didn’t fight well at all in the first fight, and even then, I still managed to draw against him.

“This time I won’t make it so close, especially now that it’s a pro fight, no head guards and 10-ounce gloves, hahahaha, the time to end him is nearing. I can’t wait to see the memes of him slumped on the ground after I’ve repeatedly beaten the life out of him. He’s facing a different animal this time.”

The 24-year-old Paul has just under 20 million subscribers and 4.6 billion views on his YouTube channel. Paul became famous on the app Vine, where users uploaded six-second videos.

“I’m excited to ruin JJ's face and I want to thank DAZN for giving me the platform to do so,” Paul said. “Last fight, KSI couldn’t beat me with only three months of training under my belt. For the past year, while JJ has been wasting his time trying to become a rapper, I’ve been training every single day. I’m finally getting what I wanted from the beginning — no headgear, 10-ounce gloves, and the opportunity to dismantle JJ’s repugnant face in Los Angeles, my home city.”

No one knows what to expect from Paul and KSI, but the undercard is strong with two world title fights, with Billy Joe Saunders facing Marcelo Coceres and Devin Haney facing Alfredo Santiago. Here's a complete guide to the Logan Paul vs. KSI 2 fight.

What time is Logan Paul vs KSI 2?

The action for the Logan Paul vs. KSI 2 fight night gets started at 7 p.m. ET with the undercard. The main card begins at 9 p.m. ET and features rising star and WBC lightweight champion Devin Haney facing Alfredo Santiago along with Billy Joe Saunders defending the WBO super middleweight title against Marcelo Coceres.

It's all part of the build up to Paul vs. KSI in the main event. The fighters are expected to take their ring walks about 11:30 p.m. ET, depending on the length of the earlier fights.

Logan Paul vs. KSI 2 live stream: How to watch the fight

The Logan Paul vs. KSI 2 fight will be streamed exclusively on DAZN in North America instead of on a traditional pay-per-view.

For more information on how to watch on DAZN, click here.

In addition to the U.S. and Canada, DAZN will stream the fight in Germany, Austria, Switzerland, Italy, Spain, Japan, and Brazil.

The "Countdown to KSI vs. Logan Paul 2" show is available for free via DAZN's social media channels on YouTube, Twitter and Twitch.

Who is Logan Paul?

Logan Paul is an internet personality who first grew famous through the social media platform Vine, which featured six-second videos. He since has become one of the most popular YouTube celebrities, with nearly 20 million subscribers.

In the lead-up to the rematch, Paul and KSI released dueling episodes of the "40 Days" documentary, which shows behind-the-scene training footage for the fight.

KSI, whose real name is Olajide William Olatunji, is also a YouTube personality with 20.5 million subscribers on the platform. He started his career posting gaming commentary videos, and he has since launched a music career.

His single "Pull Up" from the "New Age" album reached the U.K.'s Top 100 Singles Chart at one point this year.

KSI had an amateur fight before he first faced Paul. He fought YouTuber Joe Weller on Feb. 3, 2018, at Copper Box Arena in London. KSI won the fight via TKO after just 90 seconds. The full fight amassed over 20 million views.