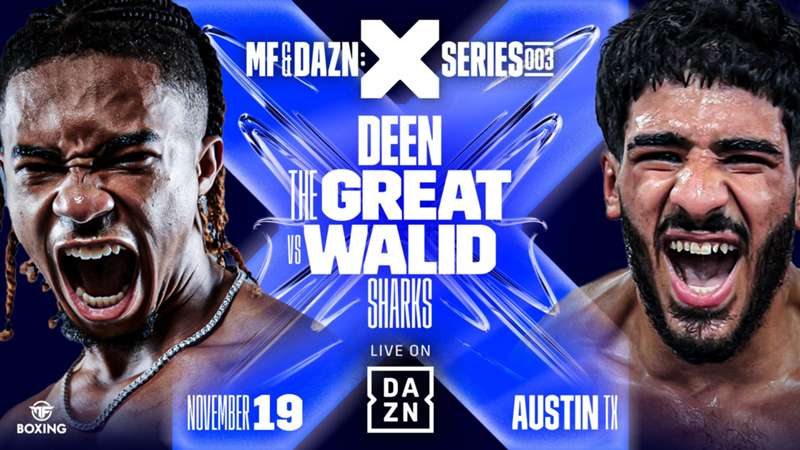 Deen the Great rose off the canvas twice to produce an incredible comeback.

Deen the Great wasn't looking so great after getting dropped twice in the second round.

But then the third round came along and Deen made sure to live up to his moniker. Deen the Great timed and unloaded on an electric right hand that dropped Walid Sharks with a thud en route to a spectacular third-round TKO in Austin, Texas on Saturday night, and live on DAZN, in the main event of MF & DAZN: X Series 003.

The rallying victory came after Walid Sharks dropped Deen in the opening round, although the referee ruled it a slip. Sharks wouldn't leave any doubts in the second round as he scored his first knockdown with a whipping left hook. Sensing he had Deen in trouble, Sharks dropped him again, doing it with a compact right hand for a 10-7 round.

An early left hook spelled that the end could be near for Deen the Great until he perfectly timed a right hand over the top, banging across Sharks' head. As Sharks crumbled to the canvas, he slowly got up off the apron but turned his back to the ref. By the time, Sharks turned around, the ref didn't see enough from his body language and bearings to let him continue and stopped the fight right there.

After the thrilling comeback, Deen the Great said he's game to fight on MF & DAZN: X Series 004 on January 14, live on DAZN pay-per-view.

Here's how the entire card went.

Massive left hand stuns Deen the Great. Walid Sharks has a green light with that shot, seemingly whenever he wants it. And just as I say that, BOOM! Deen the Great just detonated a massive, fight-changing right hook to drop Walid Sharks with a thud. Sharks is in huge trouble. He gets up off the canvas but turns his back to the ref. The ref doesn't let him continue when he turns around although in time. Incredible turn of events and win for Deen the Great.

Deen the Great vs. Walid Sharks; Round 2

facebook twitter whatsapp
A whipping left hook rocks and drops Deen the Great! Moments later during the waning seconds of the round, a compact but crunching right hand behind the ear drops Deen again. Monstrous round for Walid Sharks! Can he finish this? (10-7 Walid Sharks, 20-15 Walid Sharks)

Deen the Great vs. Walid Sharks; Round 1

facebook twitter whatsapp
Walid Sharks with the more meaningful moments in round one, including a left hook that briefly stunned Deen the Great. Plus, a sharp right hand should have been ruled a knockdown for Walid Sharks although the ref ruled it a slip. Certainly looked like a knockdown to me. (10-8 Walid Sharks)

"January 14th, your boy is back!" KSI exclaimed in the ring Saturday night in Austin, Texas.

With that, the YouTube star announced that he's fighting Dillon Danis before the latter emerged and the two had a heated confrontation.

facebook twitter whatsapp
Deen the Great scored a victory over Evil Hero his last time out. Can he deliver another solid win? Deen the Great clashes with Walid Sharks next.

Brueckner wins as DeMoor's corner ends it after the second

DeMoor was completely exhausted and looked completely out of it after the second round. His corner took a closer look and decided to end it right there, giving Brueckner the TKO victory.

Brueckner was sharper, in better condition and flat out better than DeMoor, who learned tonight that you can't play boxing. Before exiting, Brueckner delivered this special message:

facebook twitter whatsapp
Brueckner wobbles DeMoor with a left hook in the first round. DeMoor is gassing himself out and breathing through his mouth already. He's on shaky legs.

The co-main event is upon us

Josh Brueckner vs. Chase DeMoor is moments away as the co-feature to Deen The Great and Walid Sharks.

Judges score it 39-36 across the board all in favor of Greg Hardy. In the end, giving up nearly 100 pounds in weight was too much for Rahman to overcome. Hardy hurt him a few times in this fight, knocking Rahman down in the second and staggering him during the third.

Hell of a second round

Hardy hurts Rahman, with his mouthpiece flying out, and drops him with a thud courtesy of a right hand! However, Rahman shows resiliency and wobbles Hardy with a piercing left during the waning seconds. Things are heating up!

facebook twitter whatsapp
We're flying through this card as no bout has gone the distance. This heavyweight tilt between Hasim Rahman Jr. and Greg Hardy shouldn't either ... especially in a 16-foot ring. Rahman enters giving up nearly 100 pounds to Hardy, the former NFL player and UFC fighter.

KSI in the house

King Kenny unloads a right hook to the temple to wobble DK Money and then detonates a straight right to knock him out! Spectacular first-round KO for King Kenny!

Up next: King Kenny vs. DK Money

facebook twitter whatsapp
Who's taking this one? We're about to find out as King Kenny comes out to 50 Cent's "Many Men."

A quick one-two, ending in an explosive left cross, was all FaZe Temperrr needed to finish Overtflow in this fight ... if we even want to call it that.

But give credit to FaZe who bounces back from his loss to Slim the Hitman earlier in the year. After the quick, clean performance, FaZe says he wants to run it back with Slim who says that Temperrr needs to prove himself a bit more before talking about a rematch.

FaZe Temperrr vs. Overtflow is moments away.

facebook twitter whatsapp
Ice Poseidon and Brandon Buckingham were trading shots until the latter landed a big right hand that changed the fight. Buckingham poured it on, bloodying Poseidon's nose, and didn't let up until his opponent's corner had seen enough. Big first-round stoppage victory for "The Banana Man."

Minikon wins by DQ, then calls out Michael B. Jordan

Each man's gas tank was nearing empty with Nick Nack Pattiwhack being the more exhausted of the two. The ref ends the fight during the fourth and final round due to disqualification claiming Pattiwhack was holding Minikon too much. Minikon was the sharper of the two — despite being fatigued himself — and composed, repeatedly finding a home with his right hand.

After the win, Minikon calls out Michael B. Jordan. Perhaps in a future Creed?