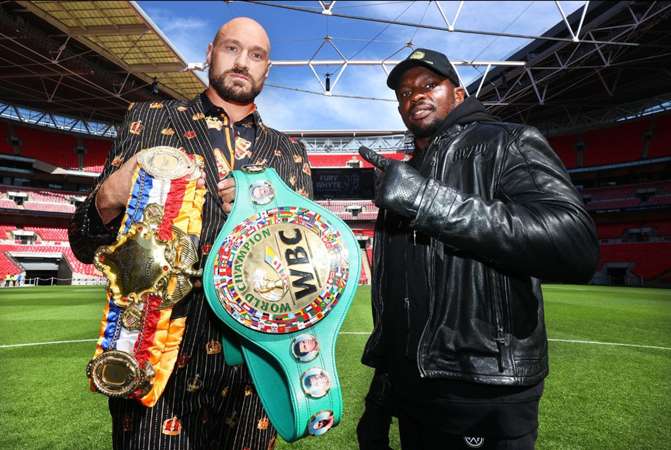 British boxing is set for a huge night this coming Saturday when Tyson Fury and Dillian Whyte do battle for the WBC heavyweight championship.

With 94,000 fans packing out Wembley Stadium, this is the biggest heavyweight domestic clash since Lennox Lewis and Frank Bruno in 1993 which holds a lot of similarities to this weekend’s main event. Fury and Whyte will be fighting for the same title that was on the line that night with Fury being the overwhelming favourite, just like Lewis.

The build-up to this particular fight has been dominated by contract issues away from the ring, but both parties are to blame. It’s clear that certain obligations have not been written into the contract and Whyte has taken full advantage of that with his silence until now, but now it’s finally fight week, it’s likely this much-anticipated clash will go ahead without any more hiccups.

It’s harsh that Whyte is being written off against Fury, ‘The Body Snatcher’ is the puncher in this fight and has always been labelled as a puncher throughout his career; meanwhile Fury has only been regarded a puncher following his trilogy with Deontay Wilder and Whyte will pose some problems which the defending champion hasn’t encountered before.

Dillian Whyte is the best body puncher in the heavyweight division, fact. Other heavyweights are just head-hunters.

Whyte will not be afraid to mix it up with Fury, but to increase his chances of winning the fight, he will need to drag the WBC champion into the trenches, attack the body and get under his skin.

Fury will try to combat this by keeping Whyte at range, smother any assault using his superior frame and slowly break down Whyte before landing the final blows. It’s no secret that Fury’s skillset means he has an advantage going into any fight he is involved in.

Part of me does think Whyte can win this fight, but it can’t be done on points.

The Brixton heavyweight will have to drop Fury and find a way to keep him pinned to the canvas. Unlike Wilder who knocked down Fury numerous times, Whyte is a better finisher so expect an assault if he does find the defending champion rising off the canvas.

However, if Dillian Whyte is unable to stop Tyson Fury within the first six rounds, the boat will have unfortunately sailed and then it will be a case of whether Whyte has enough energy to carry on.

If Fury does come out on top on Saturday night, a fight with WBA, WBO and IBF champion Oleksandr Usyk could be on the cards if the Ukrainian beats Anthony Joshua for a second time.

But while Usyk uses a similar style to Fury, the Englishman has the best chances. Once again Fury can use his size to his advantage and outbox Usyk, something which no other heavyweight in this current era can do.