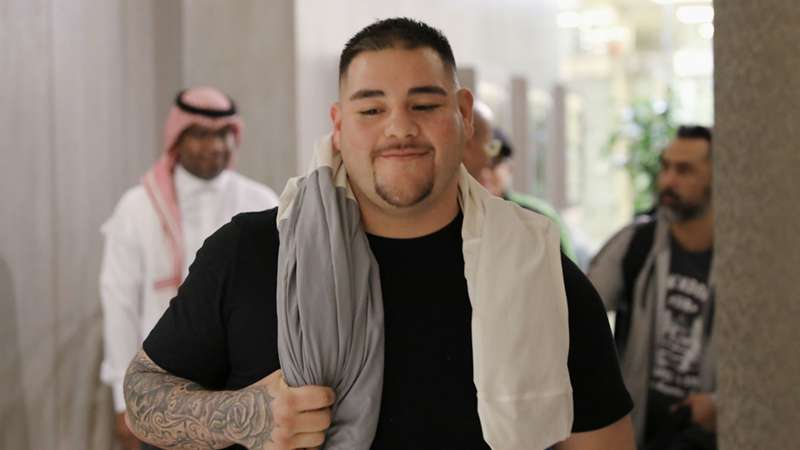 The champ is here and is confident as ever, with the Dec. 7 fight rapidly approaching.

Andy Ruiz Jr. touched down at the King Khalid International Airport in Riyadh, Saudi Arabia, on Tuesday with one vow on his mind.

"You know I made history in New York and I’ll make history again in Saudi Arabia," Ruiz promised in a Matchroom Boxing press release.

Ruiz's defense of his unified world heavyweight titles against Anthony Joshua is less than two weeks away now. The fight will take place at the newly constructed Diriyah Arena in Diriyah, Saudi Arabia, and live on DAZN, on Dec. 7, when the "Destroyer" will look to prove that his seventh-round TKO of "AJ" on June 1 was far from a fluke.

Ruiz hit the Kingdom two days after Joshua, with both heavyweights receiving plenty of fanfare.

On Monday, the former unified world champ showed the entire team responsible for helping him prepare to take back his WBA, WBO, IBF and IBO titles.

That figures to be a difficult task, considering the savage fashion that Ruiz defeated him at Madison Square Garden in June. As a 15-1 underdog that night, Ruiz shocked Joshua with four knockdowns to record the seventh-round TKO heard around the world, as he was coronated the new king of the ring in a boxing moment that will live on forever.

Their "Clash On The Dunes" rematch at the custom 15,000-seat Diriyah Arena is where Ruiz plans on exiting with his championship in tow once again — this time as his first title defense.

Both fighters visibly looked trimmer entering Saudi Arabia. How that might factor into the rematch remains to be seen.

The winner of their Dec. 7 bout will certainly look to face the victor of the Feb. 22 rematch between WBC champ Deontay Wilder and Tyson Fury, with the goal of claiming the undisputed heavyweight crown.