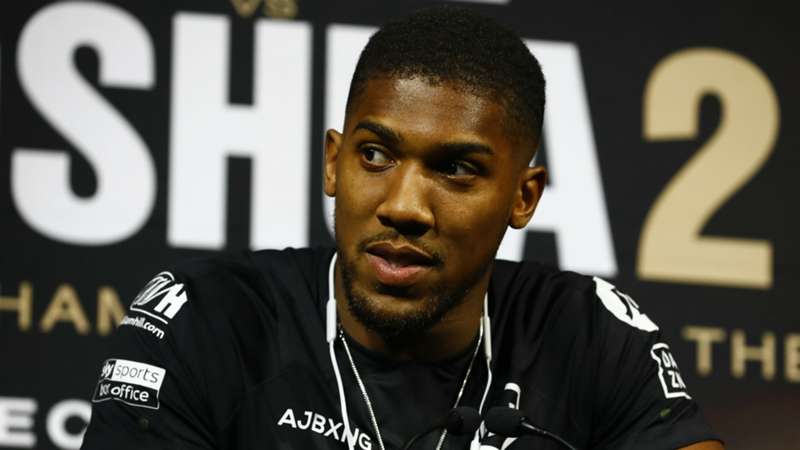 The former unified world heavyweight champion talks about the adjustments he'll make vs. Andy Ruiz Jr. and explains why the headline Dec. 7 will read "AJ got rowdy in Saudi."

Straight-faced, Anthony Joshua pressed his palms down flat onto the podium as he spoke Thursday at the Capitale event space in New York City. He’s noticeably slimmer, but his biceps are still bulging as his 6-6 frame hulked over the mic. To his immediate right sat the unified world heavyweight champion Andy Ruiz Jr. donning a sombrero, which perhaps kept the shine from his four titles out of his eyes.

The last time Joshua held court at a pre-fight press conference in the Big Apple, it was May 30, when the then-world champ infamously let the then-challenging Ruiz hold his four titles and snap photos with them before their bout. Ruiz then proceeded to drop Joshua four times en route to a stunning seventh-round TKO at Madison Square Garden on June 1 to become the first Mexican world heavyweight champion, taking those very belts with brute force.

Ninety-five days later and “AJ” did his best not to fall victim to the surreal moment Thursday, as he went from world heavyweight champ to challenger; A side to B side. Before their rematch was locked in for Dec. 7 in Diriyah, Saudi Arabia, and live on DAZN, Joshua had wanted to exact revenge at the same scene of MSG.

“I think it was important to run it back where it went wrong,” Joshua, now sitting in a plush lounge chair, tells DAZN News well after the press conference concluded. “I think it shows signs of a man who could kind of overcome adversity and walk through any challenge. That was the whole mindset being here.”

Instead he had to settle on NYC simply playing host to the second leg of the Ruiz-Joshua II media tour, which began in Diriyah on Wednesday and ended in London on Friday. Still, it did serve as a ripe reminder for what the former champion did wrong June 1 at the “Mecca of Boxing.”

While the shot of Ruiz celebrating his victory in the ring overshadows any other memory from that night, a contemplative Joshua has been able to pinpoint one of his costly errors — being overzealous and careless as a result.

With 2:17 left in the third round, Joshua deposited Ruiz onto the canvas with a short, swift left hook. After Ruiz got up, “AJ” measured him up with a range-finding left jab, before sitting on a vicious right hand that made the Mexican’s jaw swivel.

As hard as the shot was, it didn’t drop Ruiz, and that made Joshua throw punches recklessly, looking for the finishing blow. Instead, it was Ruiz who caught Joshua with a perfect left hook to the temple to put the Brit on wobbly legs.

Joshua suffered two knockdowns that round and two more before the fight was stopped. Absent are the WBA, WBO, IBF and IBO hardware that once accompanied him wherever he went, but Joshua was able to extract an invaluable lesson in tow.

“Maybe my problem (was) going back into the danger zone so quick,” Joshua says of the moment. “When I should’ve just kind of been poking and prodding and slowly chopping away, I went straight in for the kill, while the beef wasn’t cooked properly.”

The result was suffering his first pro loss in 23 fights and being on the receiving end of a deluge of stinging criticism from some of his peers in the sport.

When hearing those comments, Joshua stretches back in his chair and lets out a sigh.

“Who have they trained to comment on that?” he says. “I know they’ve fought before. But until they’ve trained an athlete and taken him to a championship level, I feel like it’s easy to criticize from a distance. To each his own, but it’s easy to knock a man when he’s down, isn’t it?”

Joshua sparked quite an uproar in England and throughout the boxing world by calling Lewis a “clown” , and the former three-time world champ’s words might have cut the deepest with the 29-year-old AJ.

On Thursday, Joshua told reporters that he’s “cut from a different cloth” in comparison to Lewis as a person, and that’s one of the reasons why replacing McCracken, who has worked with AJ since the 2012 Olympics before becoming his full-time head coach in December 2016, never crossed his mind.

“When you talk about training, you’re talking about someone who knows you, knows what you’re like in the corner, knows what you’re like as a person,” Joshua stresses. “No one could replace that. That takes years to build. I’ve always trained with different people, but my head coach is Robert McCracken and that will always be until I finish boxing.”

While he’s ardent about staying loyal to the team that helped get him to this point with an Olympic gold medal, former unified world championship and 22-1 record, including 21 KOs, Joshua is making some fine-tuned adjustments.

He looked slimmer at the press conference and plans to enter the ring that way on Dec. 7, with the sole purpose of matching Ruiz’s renowned hand speed.

Just like Ruiz will be aiming to prove that his June 1 victory wasn’t a fluke or good night, Joshua not only wants to silence naysayers, but more important, prove something to himself with this rematch.

During the press conference Thursday, Joshua summoned former heavyweight Shannon Briggs and his "Let's Go Champ!" viral call to action, as a way to hype himself up and come back from his first pro loss. He reminded people that he suffered losses during his amateur days, but always came back from them stronger.

Dec. 7, he'll try to remind himself that he can come back from a pro loss, too.

“I think that’s the main objective, really, proving it to myself,” he says. “That’s what it’s always been about. I don’t want to overcomplicate it. I know I know how to fight, I know I’m a half-decent fighter and I got it wrong on the night. And the good thing is, which is a blessing is, we get to go again.”

And when the dust settles on that Dec. 7 rematch, Joshua, with a glimmer in his eyes, vows that the headline will read much differently:

“AJ got rowdy in Saudi."