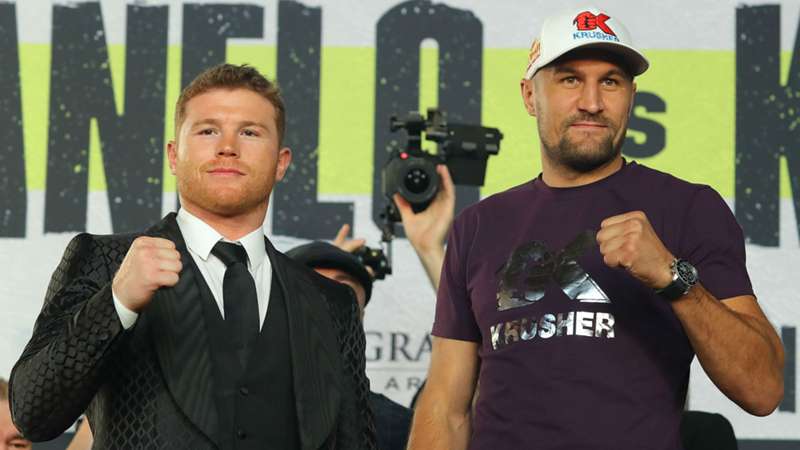 Canelo Alvarez's pursuit of boxing history continues Nov. 2 against WBO light heavyweight champion Sergey Kovalev, live on DAZN. Here's everything you need to know about Canelo's next fight, including start time, price, updated betting odds and how to watch.

Is Canelo Alvarez biting off more than he can chew this time?

Boxing fans and beyond are about to find out. The face of boxing will move up two weight classes to fight WBO light heavyweight champion Sergey Kovalev on Saturday, Nov. 2, live and exclusively on DAZN, at the MGM Grand Garden Arena in Las Vegas.

A victory from Alvarez would make him a four-division world champion, as his pursuit of boxing history continues.

“The second phase of my career is continuing just as we had planned, and that’s why we are continuing to make great fights to enter into the history books of boxing,” the 29-year-old Alvarez said in a statement announcing the fight. “That’s also why I’ve decided to jump two weight classes against one of the most feared champions of recent years. Kovalev is a dangerous puncher, and he’s naturally the bigger man, but that’s the kind of challenges and risks that I like to face.”

Canelo (52-1-2, 35 KOs) is coming off a unanimous decision victory over Daniel Jacobs in May. Meanwhile, Kovalev bounced back from a stinging loss to Eleider Alvarez last August to defeat the Colombian and take back his WBO strap in February. He then defended the title with an 11th-round KO of Anthony Yarde on Aug. 24, making this bout a sharp turnaround for the “Krusher.”

That latter bout had the 36-year-old Russian putting his power punching on display in an aggressive, pointed style that Canelo is going to have to deal with.

“We have put a lot of thought into this long-awaited night, and we’re eager to deliver one of the best undercards of the year,” said Oscar De La Hoya, chairman and CEO of Golden Boy Promotions. “This event will feature some of our brightest talents taking on the toughest fights of their careers. With Ryan Garcia, we have a huge star in the making, but he’ll need to get past a tough, hard-hitting contender in Romero Duno to secure his path for a world title. We also have Seniesa Estrada and Marlen Esparza, who will look to finally end their rivalry in a fight for the Interim WBA Flyweight Title. So, whether in person or live on DAZN, a new chapter in boxing’s history will unfold on November 2.”

Here’s a complete guide to the Canelo vs. Kovalev fight, which is available exclusively for streaming on DAZN rather than traditional pay-per-view, along with updated betting odds, the full undercard and more.

When is Canelo Alvarez's next fight?

This will be Alvarez's first fight since May 5, when he defeated Jacobs by unanimous decision. Kovalev's most recent fight was Aug. 24, an 11-round knockout of Yarde.

The Canelo vs. Kovalev fight is not available via traditional pay-per-view methods. Instead, fans in North America can sign up to watch the fight online with DAZN, the global sports live-streaming service.

How much does the Canelo vs. Kovalev fight cost?

A new subscriber to DAZN can sign up for a monthly subscription or annual pass to watch the fight. The annual pass — which includes access to all of DAZN’s live events, as well as highlights, replays, behind-the-scenes features, original shows and live reports — in the U.S. is $99.99, which averages out to a little over $8 a month. For those who want a monthly-plan instead of the longer-term value, fight fans can sign up for a monthly option for $19.99. (In Canada, the monthly plan is $20 CAD, and the annual plan is $150 CAD.)

A subscription also includes access to archived Alvarez fights, including both battles against Gennadiy Golovkin.

Where is the Canelo vs. Kovalev fight?

The Canelo vs. Kovalev fight will take place live from the MGM Grand Garden Arena in Las Vegas. Alvarez isn’t a stranger to the famed venue, with this bout set to mark his seventh time fighting at MGM. His biggest fight in the arena was his September 2013 bout against Floyd Mayweather Jr., who handed the Mexican fighter the only loss of his pro career.

While Kovalev has fought in other Vegas venues before such as T-Mobile Arena and Mandalay Bay Events Center, the Russian boxer will be making his debut at MGM on Nov. 2.