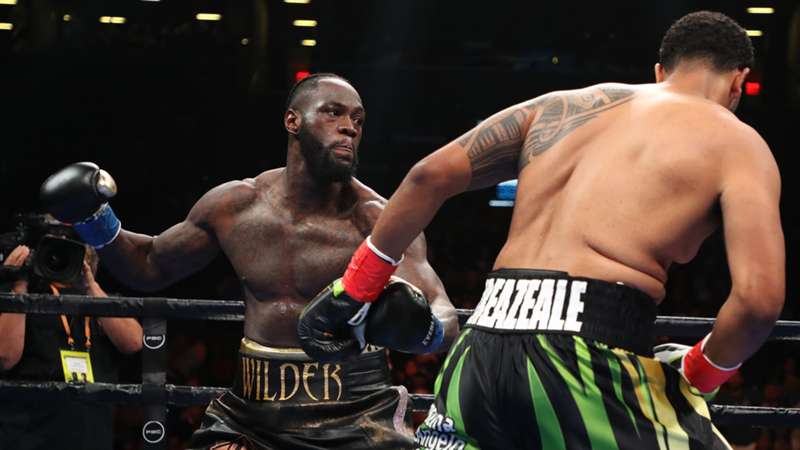 Will Tyson Fury feel that crunching force in the rematch with Deontay Wilder?

Deontay Wilder's staggering 95.3 knockout percentage should tell you how devastatingly hard of a puncher he is, especially with that massive right hand.

But just in case the numbers and gaudy highlights don't do it for you, how about taking it from the mouths of his opponents, sparring partners and even trainers?

After suffering a 10th-round TKO at the hands of Wilder in March 2018 and just before being blasted via a seventh-round KO in their rematch last November, Luis Ortiz tried to put the punching power of "The Bronze Bomber" into perspective.

"His right hand is more powerful then one could imagine," Ortiz told Business Insider before being knocked out with a straight right hand when they ran their rivalry back. "His power is like a whip type of punch, like Thomas Hearns. He's got long arms ya know."

Prior to that, you didn't even have to ask Dominic Breazeale how hard Wilder's punch is. That's because the sound of the WBC heavyweight champion's right hand detonating on Breazeale's face for a first-round KO was all the violent evidence you needed.

On sparring with Wilder, former heavyweight David Haye once told The Sun: “His punch power is 10 out of 10, that’s it. I don’t know how else to say it. You know when you’ve been hit by him. It’s very different to anyone else."

Trainers aren't safe from Wilder's thudding punching power, either. The undefeated champion told "PBC on Fox" last fall that he has sent all his trainers to the hospital due to punch-related injuries.

"Every last one of them, I've sent them to the hospital," Wilder said. "This is no joking around. This is no faking."

His trainers tacked on the painful details.

"One time, I was wearing a bodysuit, and he threw a right hand on the inside," Wilder's co-trainer Jay Deas shared as part of the behind-the-scenes clip. "I had to have hernia surgery."

Mark Breland, Wilder's other co-trainer, felt that power too.

"Deontay and his power are so indifferent. I don't care where it comes from — it hurts," Breland said. "One time, he threw a right hand and it clicked — it threw my shoulder out."

Tyson Fury, who faces Wilder in a highly anticipated rematch Saturday, has used surviving his rival's punching power, including two knockdowns in their first fight, as a badge of honor that fellow heavyweights would never be able to wear. And Fury has specifically mentioned unified world heavyweight champion Anthony Joshua as one who wouldn't be able to endure Wilder's caliber of hard-hitting punch power.

Everyone who has felt Wilder's punching power seemingly has a painful testimony attached to it. Sort of like the wreckage sitting in a scrapyard, there's a reason they got here.

But that's a machine. We know by now that Wilder has treated his opponents' faces much worse.

So, if we had to explain beyond his 95.3 knockout percentage, how hard does Deontay Wilder punch? According to his opponents, sparring partners and trainers, "unforgiveably forceful" would apply aptly.