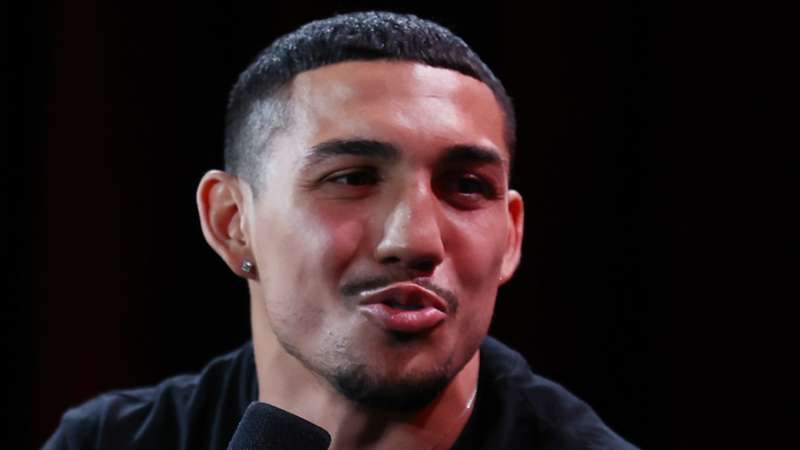 That being said, the unified lightweight champion isn't sure that the mega bout can be made.

( Editorial Note: DAZN News spoke with Teofimo Lopez prior to him learning about his positive COVID-19 test).

A total of 3.8 million have watched this footage  of Lopez, the unified lightweight titleholder, and Davis, the WBA junior lightweight and WBA (Regular) lightweight champion, as teenagers sparring with ferocity as if their lives depended on it.

"I was 15, when Tank was 18," Lopez begins reminiscing about their sparring encounter. "I think I was fighting at around 119 pounds that time. 'Tank' was 140-something, fighting at I think 122. Tank has always been a fat boy. You can see the size difference. It's a big difference now. That was what? Eight years ago."

While his clash against contender George Kambosos Jr. has been postponed from June 19 to August 14 due to Lopez's positive COVID-19 test, the Brooklyn native thinks that the boxing forces can collide one day with much more on the line. In fact, the reigning unified lightweight champ even entertained the broached premise of Davis vs. Lopez being be  the fight that could define their careers.

"I would assume," Lopez says.

"My whole thing is we can make it happen."

Lopez, though, isn't necessarily certain that the super fight can be made.

"He just moved up to 140 (pounds)," adds Lopez about the 26-year-old Davis, who will be fighting Mario Barrios for Barrios' WBA (Super) junior welterweight title on June 26 in Atlanta.

"However, I don't see them wanting to. There's a difference. They're doing what they're doing and it looks like they're making their own route. And it's sad sometimes because it's what you guys want at the end of it all. Why I do what I do and the shows that I put on is for you guys."

That being said, perhaps 140 pounds can be the meeting ground for Lopez and Davis to clash. After all, Lopez did tell DAZN News about his aspirations to destroy Devin Haney following Kambosos to become the undisputed lightweight king. And if he's successful doing that, Lopez's next move would be to climb up to 140 pounds and face the newly-crowned undisputed junior welterweight ruler Josh Taylor.

So, maybe, there's a glimmer of hope for boxing fans who would yearn to see what happens when "The Takeover" collides with a "Tank."

"Who knows?" Lopez ponders. "Maybe down the line, we can make that fight happen."