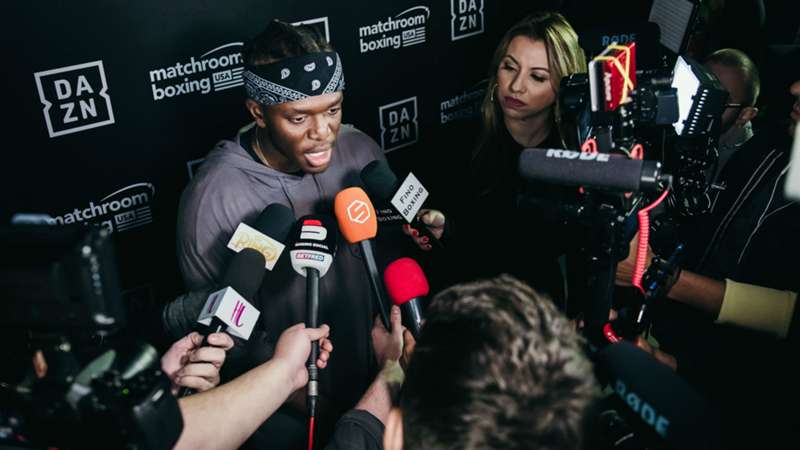 KSI is a British YouTuber who has gained attention as a gamer and as a musician.

KSI is set to take on Logan Paul on Saturday on DAZN for the rematch between the two YouTube stars, but you may be wondering just who this person is.

KSI is a British entertainer who is well-known on YouTube, where he has over 20.5 million subscribers, which is more than his opponent (Paul has 19.9M). His real name is Olajide Olayinka Williams Olatunji, although he also goes by "JJ."

While Paul is known for venturing off into many other avenues such as film and television, KSI has mostly kept his portfolio to social media. He does have a music career with a number of singles, and he released a collaborative album earlier this year.

He also started boxing before Paul; he fought another YouTuber before his first fight against Paul. In that fight, he knocked out Joe Weller in the third round.

What does KSI stand for?

KSI stands for Knowledge, Strength, Integrity. He has the word "Knowledge" tattooed across his chest, and has "Strength" and "Integrity" tattooed on each of his arms.

The acronym is part of his overall alias "KSIOlajideBT" which includes a combination of his name and BT, which stands for British Telecom.

Why is KSI famous?

KSI initially started as a gaming YouTuber in 2009, showing clips of him playing the soccer video game FIFA. He continued to produce gaming videos, although he started to branch out into vlog-style uploads. His channel grew quickly, and he reached three million subscribers by the end of 2013-14. He currently has the 115th most popular channel on YouTube, in terms of subscribers, with 20.5 million.

His popularity also grew as he and other British entertainers formed the entertainment collective Ultimate Sidemen (it would later just be called Sidemen). He continued to create videos like he used to, but within a group to help each creator expand their online presence. In 2017, KSI announced he left the group but later admitted it was a way to drive up attention, and he never actually left.

As KSI continued to get more popular, he branched out into a music career, and he has seen a lot of success in the United Kingdom. His debut song "Lamborghini" reached No. 30 on the UK singles chart. His debut EP "Keep Up" went to No. 1 on the UK R&B Albums Chart.

He has continued to release music and has even gone on tour to promote his songs. He released a collaborative album with YouTuber Randolph earlier this year titled "New Age."

KSI's net worth: How much money does he make a year?

KSI's net worth is $20 million, according to Wealthy Gorilla. By comparison, his opponent, Logan Paul, has a net worth of $19 million according to the same website.

According to Forbes, KSI was the fifth highest-paid YouTuber in 2015, earning $4.5 million. It's safe to say he's still making multiple millions of dollars as he's only gained in popularity and added other financial avenues since then. Plus, his boxing matches against Paul have been big revenue drivers as well.

KSI has more YouTube subscribers than Logan Paul, but he's been at it for longer. Paul's channel has grown more quickly; he was the fastest YouTuber to reach 10 million subscribers. KSI also has less overall reach than Paul as his other social media platforms haven't performed as well as YouTube.

Who is KSI's girlfriend?

KSI has been secretive about his girlfriend, but he is currently in a relationship. In an Instagram post on Nov. 1 leading up to the fight, part of his caption said, "Throughout this period I have missed my family, my friends and my beautiful girlfriend, but they all understood that me training in Vegas was necessary."

KSI's debut song "Lamborghini" (featuring P. Money) sits at over 108 million views on YouTube and is his most-viewed video on the platform. His Spotify page says his account has 947,621 monthly listens, with his most popular song being "Pull Up" from his 2019 collaborative album "New Age."

Here's a look at his EPs and albums.

He also has released a number of singles that weren't put on albums, and he has been featured on other artist's projects.