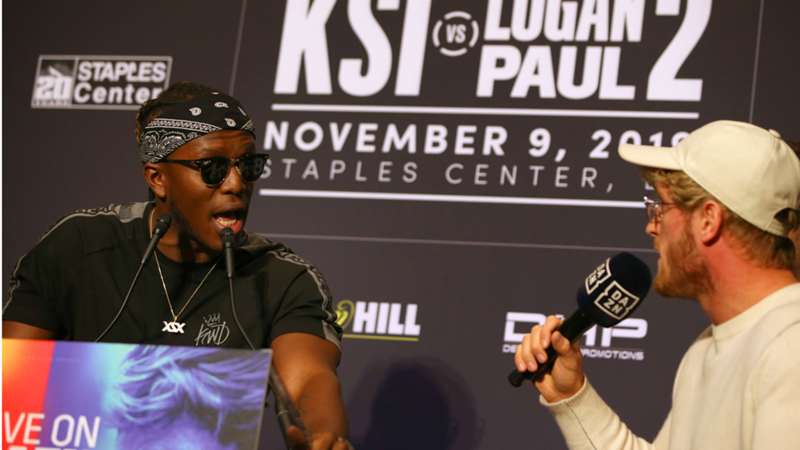 Here's everything you need to know about where and how to watch the highly anticipated rematch between the YouTubers.

It has been yet another entertaining buildup to what is sure to be a spectacle when Logan Paul faces KSI in their highly anticipated rematch.

After battling to a majority draw last summer, the two YouTubers will look for closure to their rivalry Saturday night, when they clash at Staples Center in Los Angeles.

In the original fight last year, Paul had his way with KSI over the first two rounds until fatigue caught up with him, and KSI came on strong during the third and fourth frames. An entertaining finish paved the way for the majority draw.

This time, there will be no headgear, and each boxer will be donning 10-ounce gloves. If the final fight press conference was any indication, we're bound to get pure entertainment gold in this rematch.

Below is everything you need to know to watch the fight between Logan Paul and KSI.

What TV channel is the KSI vs. Logan Paul 2 fight on?

KSI vs. Logan Paul 2 is available in the U.S. and Canada only by signing up for a subscription on DAZN, a global multisport streaming service. It is not available via pay-per-view through traditional cable or satellite providers.

The DAZN app can be downloaded on many internet-connected devices, including but not limited to:

The fight can also be viewed on a computer desktop from Chrome, Firefox, Internet Explorer and Safari browsers via DAZN.com.

For more information on how to get DAZN, click here.

In the U.K., the fight will be shown on Sky Sports Box Office. In Australia, France, Netherlands, the Baltic region, India and Scandinavia, the Logan Paul-KSI card will be available via FITE.

How much does Logan Paul vs. KSI 2 cost on DAZN?

If you're new to DAZN, you can sign up for a monthly subscription or annual pass to watch the fight. The annual pass — which includes access to all of DAZN's live events, as well as highlights, replays, behind-the-scenes features, original shows and live reports — costs $99.99, which averages out to a little over $8 a month. For those who want a monthly plan instead of the longer-term value, fight fans can sign up for a monthly option for $19.99. (In Canada, a subscription is $20 CAD per month or $150 CAD a year.)

What time does Logan Paul vs. KSI 2 start?

The main event between Logan Paul and KSI is expected to begin at approximately 11:30 p.m. ET. Paving the way toward it will be Devin Haney defending his WBC lightweight title against Alfredo Santiago in the co-feature and Billy Joe Saunders putting his WBO super middleweight strap on the line against Marcelo Esteban Coceres as part of the main card as well.

In addition, DAZN will stream a countdown show to the KSI-Logan Paul 2 fight on its social media channels, including YouTube, Twitter and Twitch.