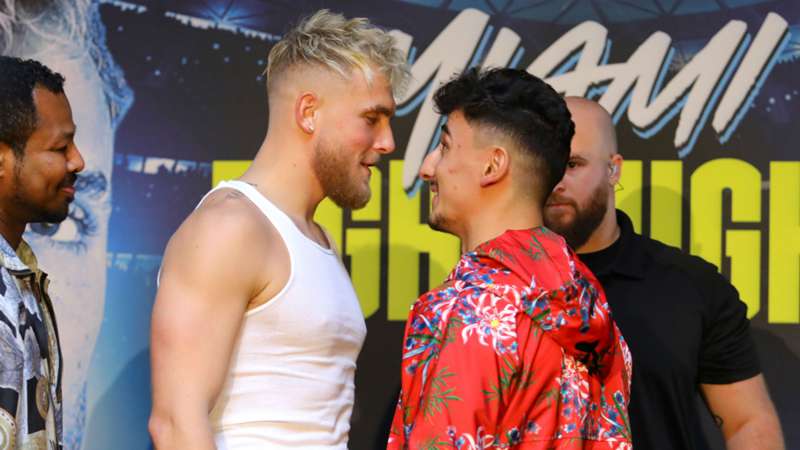 Jake Paul and AnEsonGib face off on Jan. 30 to settle their beef.

YouTube personalities Jake Paul and AnEsonGib meet in a highly anticipated clash on Thursday, Jan. 30, from ​Meridian at Island Gardens in Miami, live on DAZN. It serves as the co-main event for the Demetrius Andrade-Luke Keeler WBO middleweight title fight, and takes part during the build-up to Super Bowl 54 in Miami.

Paul and Gib will be making their professional debuts. The bout will be six 3-minute rounds with each fighter wearing 10-ounce gloves. Paul and Gib competed on the undercard of the first fight between Paul's brother, Logan, and KSI in 2018. Jake defeated KSI's brother, Deji, and Gib beat fellow YouTube personality, Jay Swingler.

The seeds of the Jake Paul vs. Gib fight were planted during the buildup to Logan’s rematch with KSI in November. KSI had proclaimed his friend Gib could beat the younger Paul in boxing.

Now, with the fight on hand, Jake Paul has made it known his fight vs. Gib is part of his plan to avenge his brother's loss to KSI.

"It seems like I’m overlooking him because that’s the narrative we’ve built," Paul said at their press conference at the beginning of January. "At the end of the day, I have to defeat him first. Jan. 30 is what I'm focused on. But I know I’m going to win. You have nothing to lose. This is your biggest payday. This is your 15 seconds of fame. You’re seven-and-half seconds in. How is it so far? Is it good? You enjoying your 15 seconds of fame? Soak it in while you can.

"But here’s the thing: You have nothing to lose. I have everything to lose. I’m Jake Paul, the big, bad wolf. If you think you have a mental edge over me, you’re f—ing wrong, kid."

Gib, meanwhile, says that he's put in the work to make him ready for the challenge.

In addition to Paul vs. Gib, the rest of the card features three world title fights, with Andrade-Keeler, Tevin Farmer against Joseph Diaz for Farmer's IBF junior lightweight title and Daniel Roman vs. Murodjon Akhmadaliev for Roman's IBF/WBA junior featherweight titles. Here's a complete guide to the Jake Paul vs. Gib fight.

What time is Jake Paul vs. Gib?

The undercard kicks off at 7 p.m. ET, with the main card slated to begin at 9 p.m. Jake Paul and Gib are expected to make their ring walks a little after 11 p.m. ET, although the time depends on the length of the earlier bouts.

*The countdown show leading up to the fight features Logan Paul and Steelers receiver JuJu Smith-Schuster and can be viewed for free on DAZN's Facebook, Twitter and YouTube channels.

Jake Paul vs. Gib live stream: How to watch the fight

The Jake Paul vs. Gib fight will be streamed exclusively on DAZN in North America instead of on a traditional pay-per-view or YouTube.

Those interested in watching the fight can find DAZN on a number of different systems, including but not limited to, Amazon Fire TV/stick, Android, Apple TV, Google Chromecast, iOS, Playstation 3, Playstation 4, Roku and Xbox One. Viewers can also find it on DAZN.com using browsers like Chrome, Firefox, Internet Explorer and Safari.

Comcast customers can sign up for DAZN on Xfinity Flex and X1.

For more information on how to watch on DAZN, click here.

In the U.K., the fight will be shown on Sky Sports.

How much does the Jake Paul vs. Gib fight cost?

Where is Jake Paul vs. Gib?

The Jake Paul vs. Gib fight is taking place at Meridian at Island Gardens in Miami, near South Beach. The venue was built for Super Bowl events in the lead-up to Super Bowl 54 on Feb. 2.

Who is Jake Paul?

Paul made his name with his brother Logan on the social media app Vine in which he'd post six-second videos performing stunts. He also played the character Dirk Mann on the Disney Channel series "Bizaardvark." He since has become one of the most popular YouTube celebrities, with over 19.7 million subscribers, and his videos culminating 6.3 billion views in total. The 23-year-old also has 12.8 million followers on Instagram.

AnEsonGib, who also is known as Gib, is a YouTube personality with over two million subscribers to his channel. He became known for doing unusual short comedy videos along with videos of himself playing the FIFA soccer video game.

Gib, whose real name is Ali Al-Fakhri, is friends with The Sidemen, a British YouTube group that featured KSI. Gib's fight with Jay Swinger accumulated over 1.8 million views.